Thanks for all the lovely comments about my scrap book page, I really had fun doing it and have already looked out some more photos to do another one...

So, last night's Paperartsy artist was the lovely - and very talented - Gillian Simson - who was taking a break from her studies to wow us with some of Darcy's new stamps... which aren't released till later this month.  She also used her 'cut up post card' technique that I love so much... so it would be rude not to have another play, right?!

I was going to make it this way, but when I decided which stamps I was using, realised it would work better in landscape format... 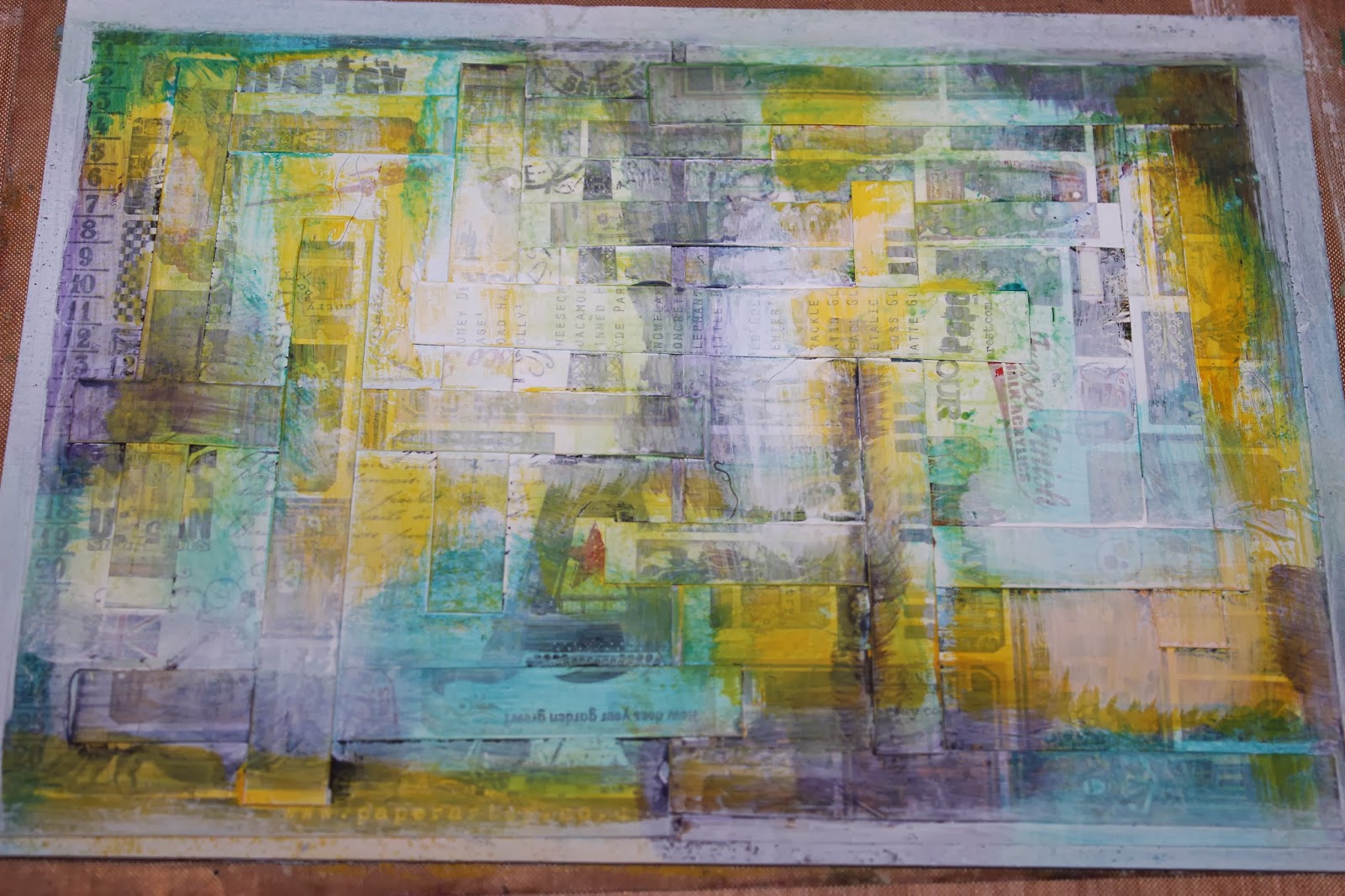 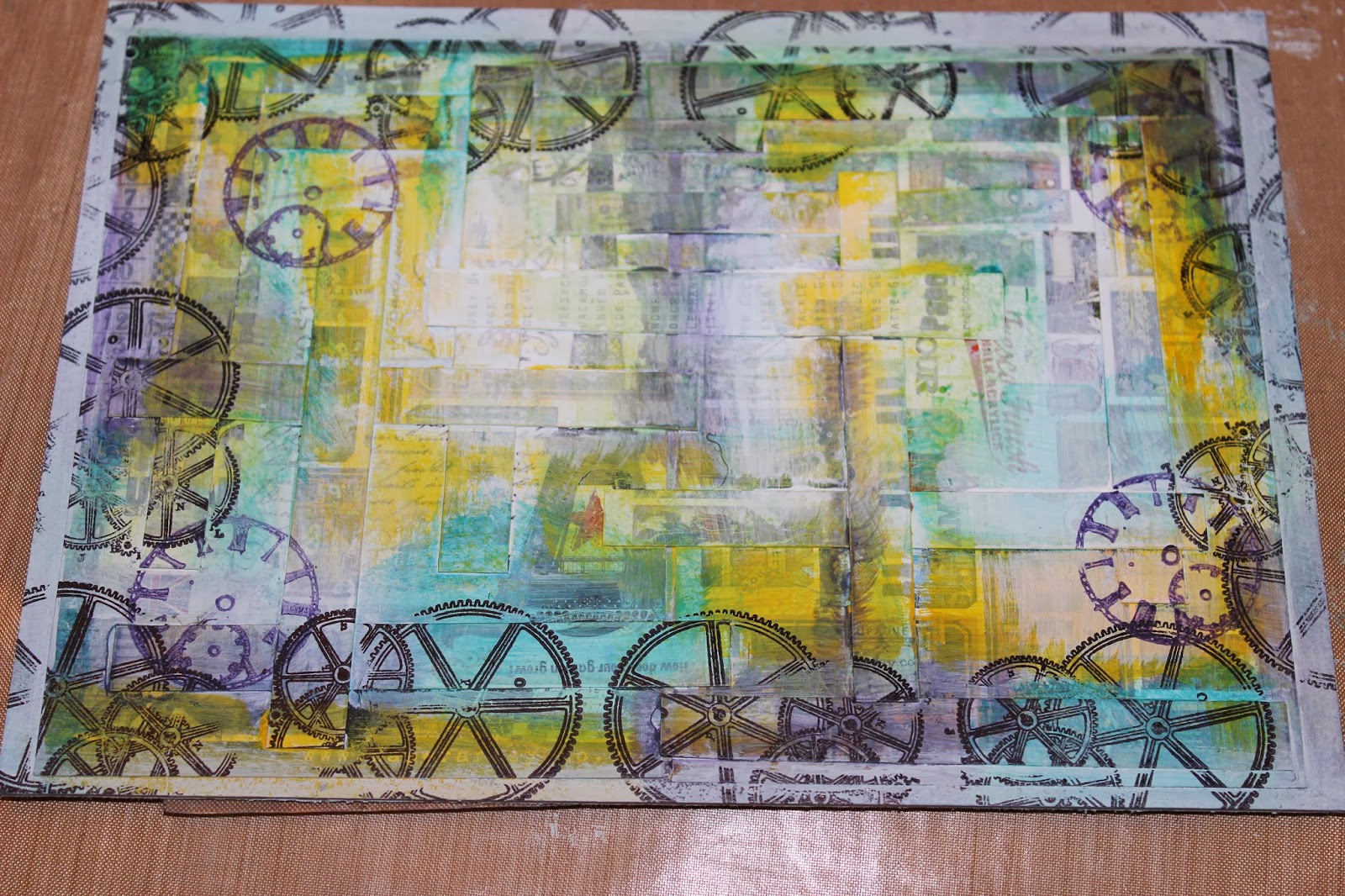 Stamps were from the HP1107 set, stamped the cogs or wheels in black, and the clock in Eggplant round the edge. 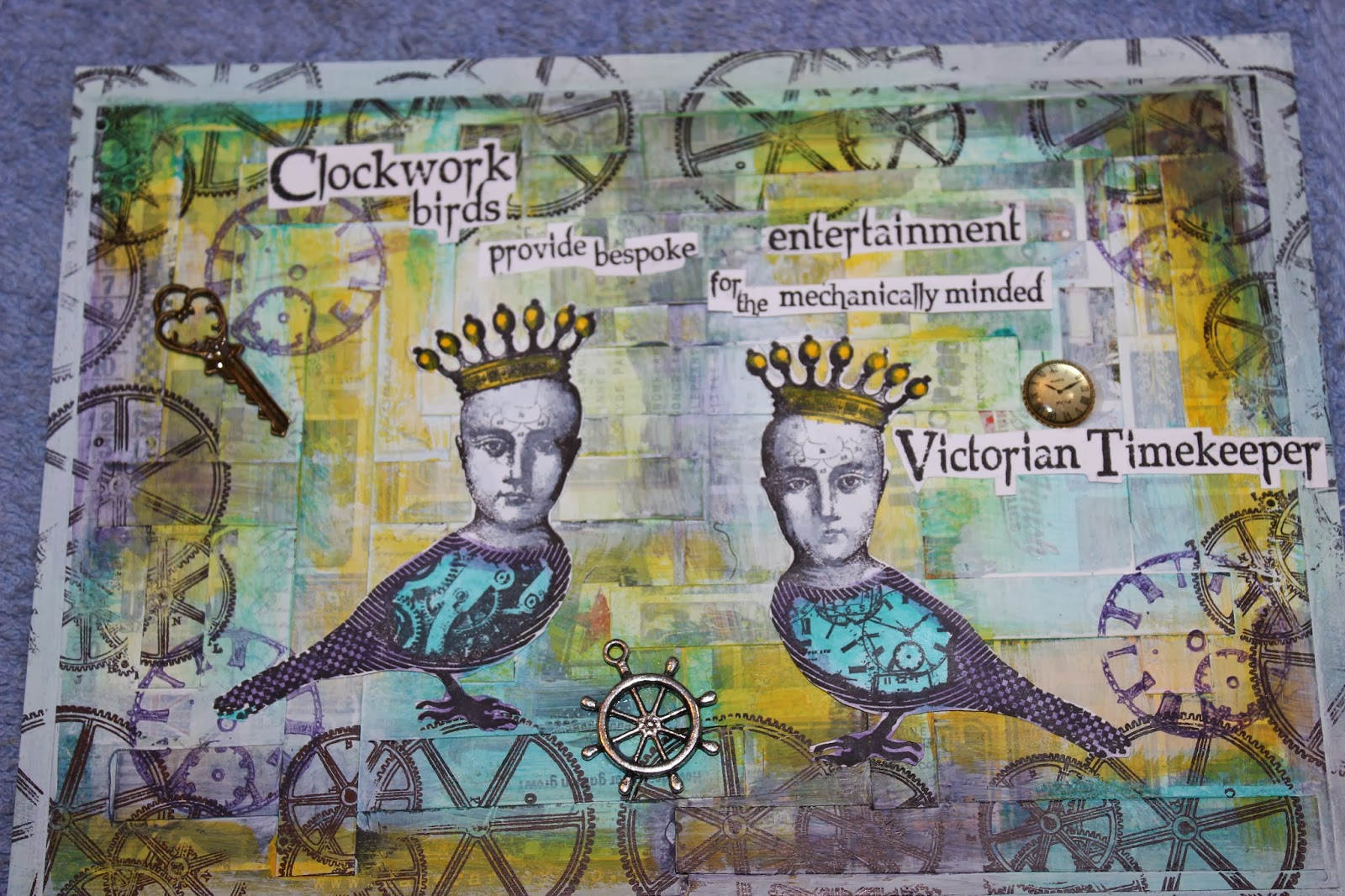 stamped the two steampunk birds on white smoothy paper and painted them with the same colours, then cut them out (boy, was that fiddly!) and placed them on the background. 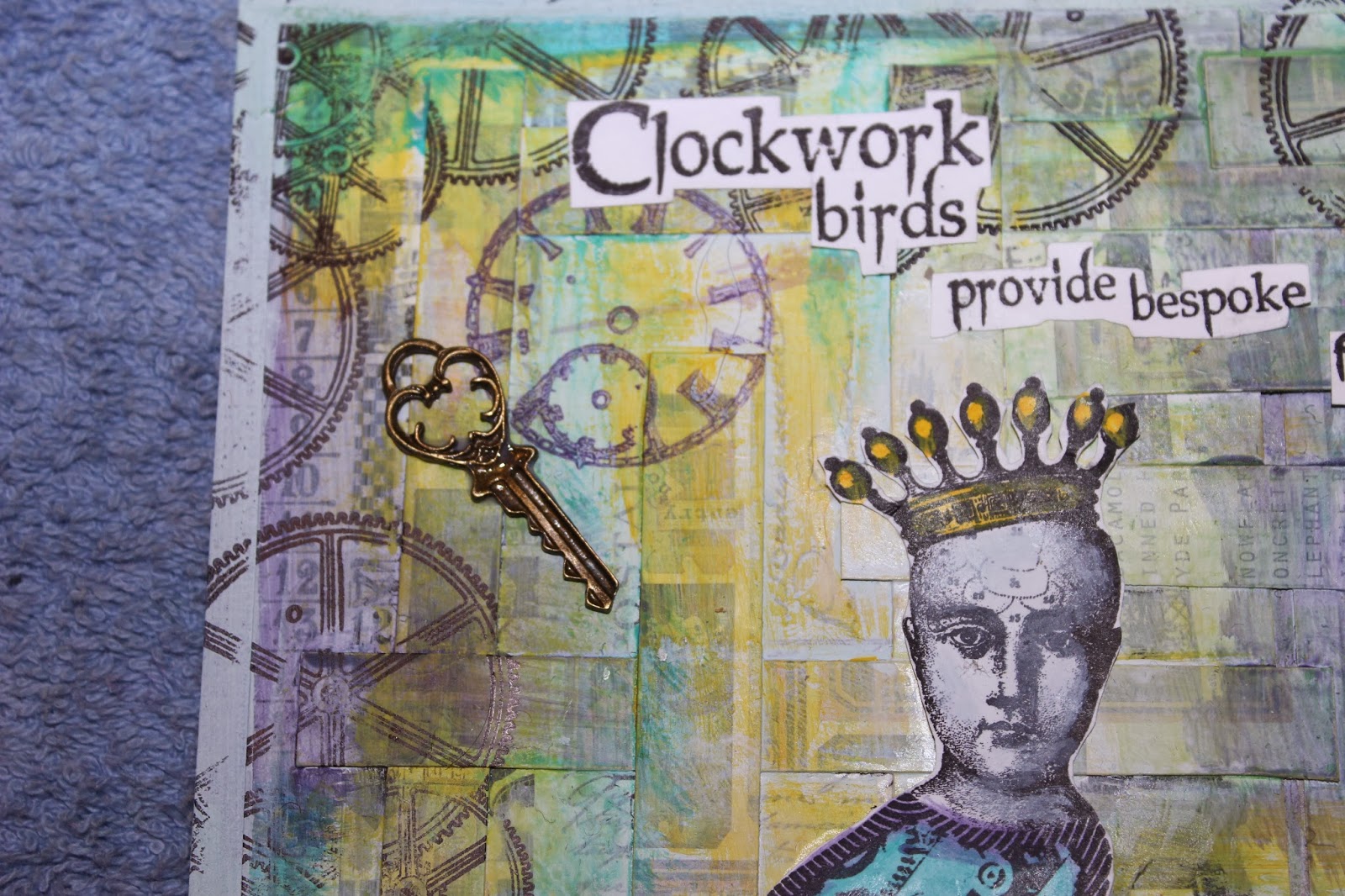 stamped and cut up the text from the set, and added some metal bits and bobs from my stash... 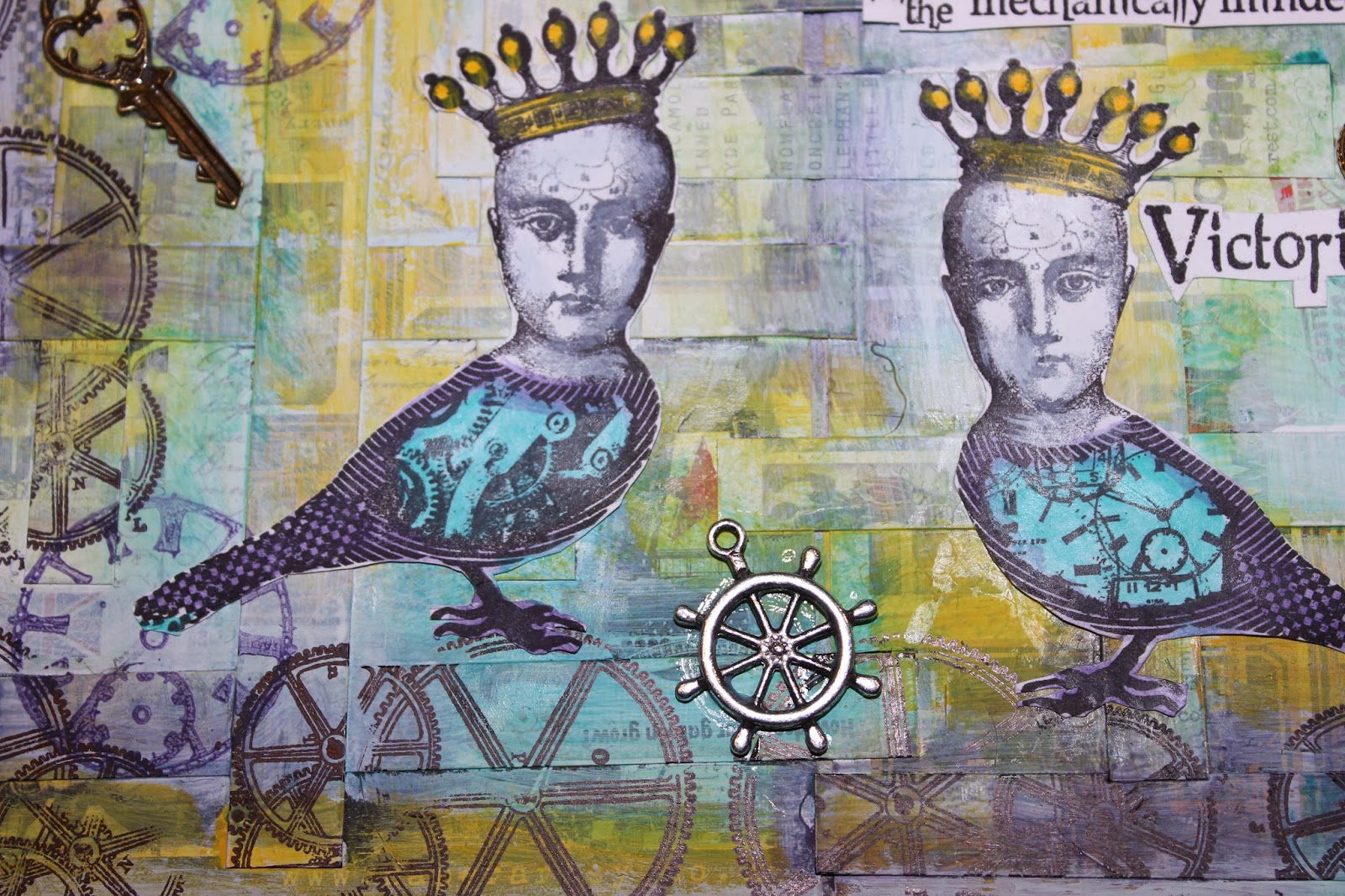 Not used these guys for ages, it was nice to play with them again!!

Off to link up with the Paperartsy challenge here
Posted by Helen at 18:29

I can't seem to keep up with you. I was just coming to see your scrapbook page when I saw this post. I love the look of steampunk and would like to do more of it. Yours is simply stunning.

Woo hoo ... I know I can always rely on you to come up trumps Helen and you did again ... it's great to see these two old birds back (not used them in a while), loving the addition of Eggplant to your colour combo. Thanks again. xx

This is totally gorgeous Helen, you are on a creative roll. Adore the colours and stamps used. Works soooo well. Bet that you are buzzing!

Great take on Gillians piece Helen..I love the colours ou've used and those stamps work really well!! you have been a busy girl haven't you!!

I love this Helen! The colours, the stamps, everything! It's fab! x

Fantastic Helen, love to come and see how you interpret each challenge, you are such a fabulous supporter of the PaperArtsy blog.

Brilliant project, colours and technique are so gorgeous.

Another fab, fab, fab project! I love the colours, the background and I've always loved those birds - wish I had them! Wish list, maybe? Julie Ann xx

LOVE this Helen! Looks really fabulous! It was worth all that fiddly cutting out! Mwah x

Really like this page Helen the colours play so well together. I'm really loving lilac/ purples with yellows and golds but adding the blue and green is ingenious. I also love that feature stamp - on my to get list. Great page x

I love this, great use of the postcards and wonderful colours. Great choice of stamps,

Very cool background - and I love those stamps!
Alison x

Very, very cool Helen! Not colours I would automatically think for Steampunk but they work SO well!