Welcome back for another Wednesday round up at WOYWW - who stole November?  Cannot quite believe that it's December on Friday!!

I am still slowly slowly making Christmas cards... so many still to do.
I took them down to count them up this morning and check the list... I've booked a few days off work at the start of next week to try and get them finished!! 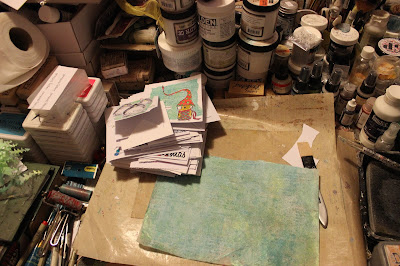 the pile may look large but there are only about 32 there...   and I have half a tissue masterboard I've been using for some backgrounds

I was looking for a snowflake stencil to add another layer to the masterboard.. but the one I have (the original Dylusions snowflake stencil) has all different sizes and they're all too big... I have like a gazillion stencils and you never have the one you want!!  (I have ordered another one now!)

I've done a mixture of designs - I get bored doing the same ones over and over - but I am still loving the grumpy penguins I got last year so have been doing quite a few with them. 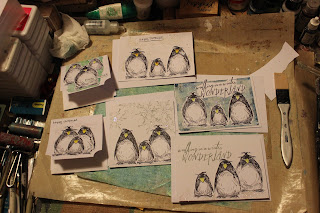 Hopefully by next week they'll all be done... then comes the "fun" bit of writing them!!  Have to admit that is not my favourite bit...
Till then, happy desk hopping.
Posted by Helen at 00:00 33 comments:

unlike the weeks which are rocketing by, it's time for another WOYWW already!  Not sure who's stealing time but can I have some back please... Head to Julia's for the link and the whys and wherefores

anyhow, as I was saying, slowly slowly, the pile of cards is growing.. 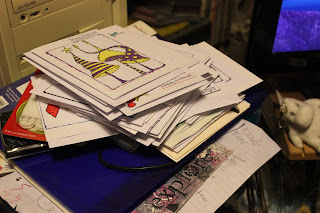 but I am still not really in the mindset so where my evenings should be hard at them, instead they are .... not. 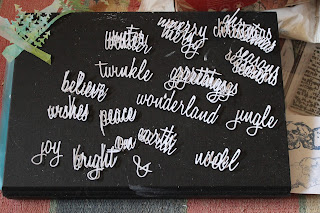 so on Sunday I spent a while forcing the dies through the Big Shot - forcing because I was trying to do lots of them at a time, filling cut cutting platform, but that was a false economy because they wouldn't all cut fully.

eventually I got a few each of the words I'll use more of, and one of the others just so I have them...

I found a little box to store them in


But, as it is "desk" sharing day, I'd better share today's view... well, obviously it's Tuesday night's view.. 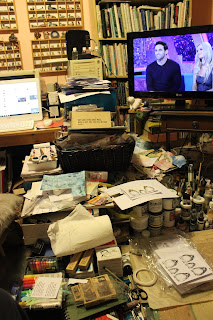 took a 'vertical' view ... last year's favourite Grumpy Penguins are making a re-appearance as I love them.
balanced on the pile of texture paste pots is a card tht was left to dry (it's well dry now!)

to the left of the tv (Strictly, It Takes Two)  is the pile of cards


to the left of the craft mat and the penguins, are the boxes of everyday supplies that have now got rather over full and cause a tumbling mess when I look for anything (foam pads, glue, being the main culprits)

Hi, fellow deskers.  Welcome to another What's On Your Workdesk? Wednesday... I am still having to force myself to keep at the Christmas cards.. 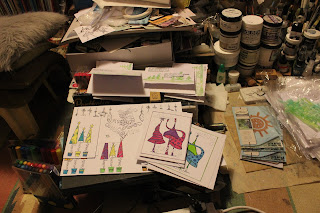 A little pile of cards I've made  this week, (well at the weekend really) although I have made the fatal mistake of not getting out my wordy Christmas stamps to stamp inside as I go (I never use inserts, just can't be faffed!)


some colouring being done too on the sheet on the left. and at top just under the teetering box of "stuff" are some of the trees I was using last time
On the craft mat you can see some dies... 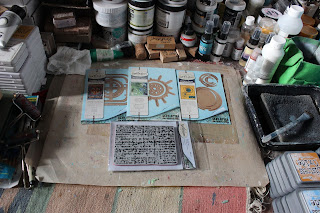 so here is the pic I took of them (ready for today) when they arrived..

3 new Seth Apter dies for his Spellbinders range, and a stamp - it is called French Script ... it's quite a Gothic style so you can't (well, I can't) make out any of the words... but will make a good background.


So, I should be eating dinner and getting some more colouring done (writing this before Tuesday dinner!)  - we'll see if that happens!

Had a slightly damp trip to Kew on Saturday (couldn't miss two in a row) and snapped some great raindrop shots (they are all here if you have time)  but I'll leave you with my favourite to whet your appetite... 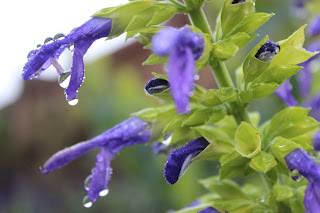 wow, Wednesday again!!  Time to hit some desks - Julia's waiting!
I didn't go to Kew last Saturday (it was forecast heavy rain - although in the end it was nowhere near as heavy as that...could have gone after all)  but instead pottered around.. went shopping 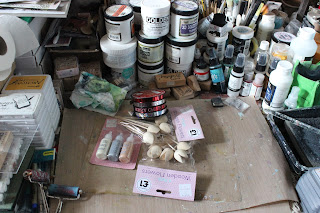 called into the Works.. as you do.  been keeping an eye out for those wooden tulips for months, some Works version of Enamel Accents - 3d pearl paint, and some Christmas curling ribbons which will either make it to embellish some gift wrapping or may go on some cards or even a mixed media project or other! 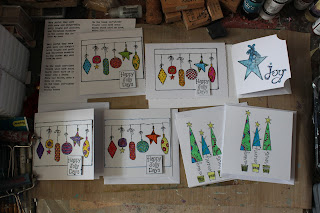 
I also started a couple of sheets of tissue with some brayered Pebeo iridescent paints... 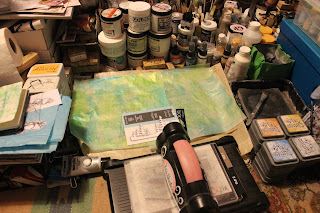 on the way home from work tonight I had an idea to use a Memory Box die of some fir trees... 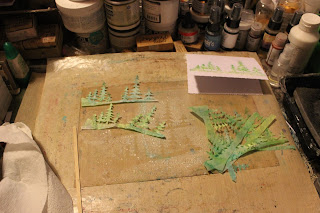 so I have a sheet full of trees die cut... my first idea to add snow (in the form of a slightly glittery texture paste) is drying on the card base top right...


My next idea was to spray some of the trees with a white Lindy's Stampgang spray to add the snow...

we'll see how that turns out!

Thanks for the comments about stamping the skulls - I have and indeed had thought of using, the long cutting platform as the mount.  will give it a go

Watch this space!   Till then, happy desk hopping - see you at the Stamping-Ground
Posted by Helen at 00:00 32 comments:

That was a quicker week than ever!  Here we are reporting for desk duty with Julia - and it's November!
I'm really starting to sound like my Mum - or my Grandmother!

I don' t have much to share today, my floor space has gone untouched .. 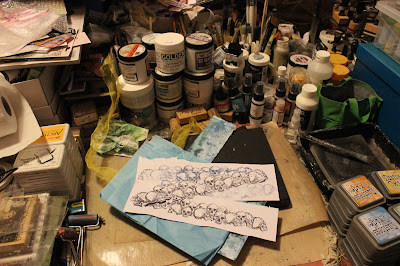 although I did manage to stamp out the skulls ... after spending some time looking for a long acrylic block I was convinced I had that would fit the stamp (it's nearly 12 inches long) - I'm still not 100% sure I don't have one... I tried it without a block (not bad but not perfect) and with two smaller ones - that worked ok, by inking the stamp and putting it onto the card, then laying the first block on top of the stamp and lining up a second one next to it, and pressing down.... the hardest bit was removing the block without wobbling the stamp (till I realised all I needed to do was lift the blocks together and the stamp would come with them - doh!!)

I had planned to use them in a journal page but so far haven't got any further...
Something tells me instead I really ought to be starting my Christmas cards very very soon!! 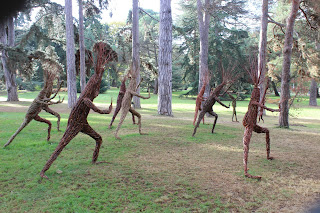 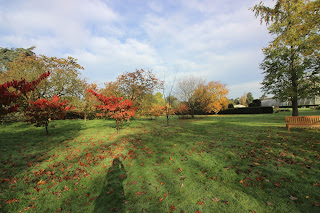