Sunday Stampers - Rip it Up

Sunday Stampers today is going back to the 80s with Hels' inspiration coming from a song I didn't actually remember, "rip it up and start again" till I Googled it. Anyhow, the theme is Ripped/Torn so I have done just that for this card. 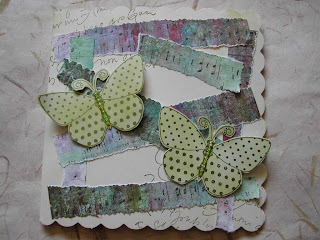 I used as my starting point the remains of the sheet of Crafty Individuals paper I used to cover the numbers in my Tag Tuesday tag last week.
I ripped the paper using a "grip and rip" ruler I bought - I think at Newbury LAST July and which I've never used before.... which has serrated deckle edges - into strips.  I took another of my fave cream coloured scalloped edged cards and smooshed a bit of shabby shutters DI across, stamped the script stamp across the corners of the card using forest moss DI and then placed the strips until I was happy with the pattern and then stuck them with a glue stick.  I had a couple of the large Wendy V butterflies stamped on some white card but it was too stark so I coloured that with scattered straw DI and cut them out, and glued them down the middle only so I could bend the wings.  I added some ordinary stickles glue (star dust) along the butterfly bodies where it's picked up the yellow ink below. 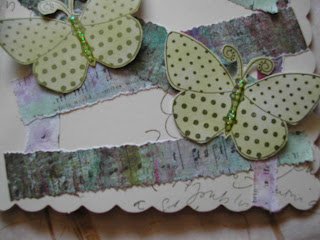 I know that the bottom strip is upside down (you can tell I never mastered reading music!!) but i was going for the ways the colours had to overlap, not the pattern on the paper.....
Ok, I am off out now to pick up the photos I took at Kew (yes, I know, Kew again!) yesterday - but it was a glorious morning so hopefully they'll be good - catch them on my other blog later!  Give me a couple of hours!
Posted by Helen at 11:48

Hi Helen, woweeee this is fabby! Love the shabbyness of it all and those butterflies are gorgeous! hugs Heidi xx

OOoh great card Helen. The colours are FAB. Hope you've had a great weekend. Sorry for not getting the chance to call sooner. Have a great week. Hugs, Gez.xx

Great card, love the torn papers and of course the butterflies.

Loving the ripped look Helen, thanks for joining in hun x

Way to let 'er rip, Helen! lol Love that paper, the colors are scrummy. The butterflies, well, of course I love them. Fabilistic!