I have had a bit of a splurge (and some!) on some of the new Paperartsy releases that have been launched at Creativation (what used to be called CHA, much easier!) and the first two sets have arrived.. 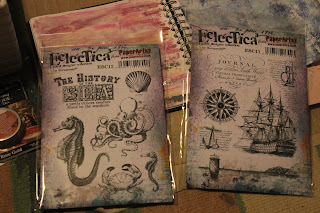 so these are the first two  - designs by Raquel Burillo Perez ("Scrapcosy")  and I inked them up straight away (because I am going to now.  No more storing stroking not using stuff.. Buy it.. Use it..for a while at least!)

You can see they are laying against my square journal which I am having such fun in... so, Monday night I used the ship set, on the blue page... and Tuesday night (tonight, but don't tell) I used the seahorse set on the pink page.. 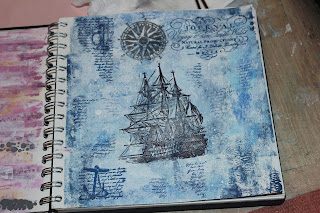 the blue paints were brayered and when the stamps arrived, I added a bit more white paint to allow the ship to show up... it stamps beautifully, as you would expect for Paperartsy stamps... 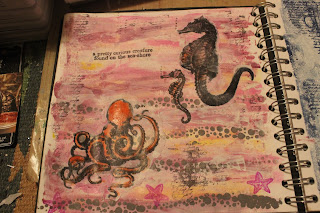 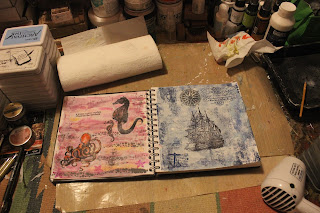 the pink page (applied paint with my fingers, something I never do, and really don't like to do much, but for some reason it felt right...)  It started as so often, with leftover paint from something else

I know pink is odd for a seascape, but hey it's a fantasty seascape!

I had forgotten that the page beneath this one was the one with all the die cut flowers glued to it, so some dodgy stamping happened - so I re-stamped the big seahorse and the octopus on tissue and glued it over the dodgy images..
See, on WOYWW we share our secrets!

and here they are on my desk!


There is a lot more stuff to come, but some of it is on pre-order, so I don't know exactly when it will be making it's desk appearance!

you'll just have to keep watching..

Love both those sets of stamps and i especially love what you did with them.
Great pages!
Hugs, Neet 2 xx

Oooh, loving the new stamps - and your pages!
But how do you manage to be first most weeks?? Are you psychic? Do you just 'know' when Julia's going to post?? Spooky :D
Happy WOYWW!
no. 5

Morning Helen. Especially love that tall ship - have a son in law who enjoys sailing those. I agree - Julia must have been up really early this morning!
Take care. God bless.
Margaret #4

You must be up early every Wednesday to attain the number one spot. I am an hour ahead of you and have only managed it once. Love your desk this week. Anickaona#3

Morning Helen! Thanks for your early visit! It feels good to be back again ��. Great stamp sets, looks like a lot of fun!
Cheers
Gabriele 10

Good morning my friend. I really love the pages you’ve been creating this week. I love seeing how you build up each page so thanks for sharing it.
Hugs,
Annie x #15

Hello there those pages are fabulous, love what you have done. I really do like the pink sea! :-) Anne x #21

Love the stamps Helen and your use of them. i am having to be very good at the moment. I added up my wishlist for the new Tim Holtz stuff and it came to nearly £200 even with discounts and using the less pricy suppliers. I think I'll have to build up slowly. In the meantime I will enjoy your new stuff vicariously lol. Sarah #18

Nice sight, and I love the idea of using it as soon as you get it. A good example I suspect! Love the detail on the stamps, although again, they ae a subject that I would pass over without a second thought! I like the pink..suitable for a jiggly sea creature, somehow!

Happy WOYWW. More new stamps - and I love to see what you have got, without actually spending myself. Ali x #28

Wow, great stamp sets (and pages) I've been watching some of the videos from Creatavation (and yes, I still call it CHA...so much easier) and have been making lists-but haven't pre-ordered anything yet (the Tim Holtz cutting mat has me very intrigued!) And the new colors for Dina Wakely...Yum!

Oh wow, that seahorse stamp is just AWESOME! And the sea actually CAN be pink, I've seen it (when the sun sets, mostly) so I do think the color is perfect for a 'sea page.' Thanks for visiting my blog earlier, happy woyww and a big hug from Holland, Marit #24

Ooh I really like both those stamp sets, and I love what you've done with them. Well done for using your new stash straight away - most of my studio is filled with stuff I've never used so I really ought to follow your example!
Hope you have a good week,
Diana x #20

Hi Helen, the details on those stamps look really good, and I love the square shape to the book too :) ~Stacy #32

Hi Helen, love the new stamps. I've not had chance to open my sales stuff yet and you're starting with the new stash, still I have ordered the new Oxides so looking forward to their arrival. Have a great woyww, Angela x17x

The stamps look fab in your journal.

It seems that every week I visit you have new stash,how lovely that would be, but halas my budget doesnt allow that.maybe that in future those amsterdam inks will appear😉,thx for your visit,Vicky

it sounded like a fabulous show and the stamps predict a pirate in your future.
Have a fantastic week
hugs Monica #29

Oh, my goodness, Helen! I love what you did with those images in your journal! Great job! Have a great crafty day! #34

Hi, I have no desk this week, so just having a quick tour round everyone's desk. Love the blue journal page! Have a lovely week, Heather

I KNEW you would have new stamps! Your pages look brilliant!Chrisx

Gorgeous new stamps, Helen, and I love what you are doing with them. I love anything with a sea theme. Thank you for your visit and your lovely comment - glad Mum's funnies made you laugh! Good news today - my hubby's plaster has come off and for the next fortnight he's got a boot, and after that he will be able to drive again, and he will be able to look after me after my operation. My pre-assessment appointment went well (very thorough), and I am seeing the anaesthetist next week, so hopefully I'll soon be in and having it done.

Hi Helen! I LOVE your new stamps! They look great on your new journal pages. I use that tissue paper trick too! I do feel better today, thank you for your concern, although yesterday afternoon was spent in Emerg. I'm fine now, hopefully will stay that way! Have a great week, Lindart #37

I love these pages - and the one with the octopus is fabulous - I actually love that colour!

Fabulous underwater scene - that glowing octopus is gorgeous - and the seascape above is full of beautiful blues. Lovely work with Raquel's new stamps.
Alison x

Great pages, I love that seahorse.