Another fantastic tag today from Tim but I didn't have either of the dies he used (shhh, don't tell but I've ordered the rosette die now, I gave in.....)

So I hand-folded this one and actually, it worked really well! 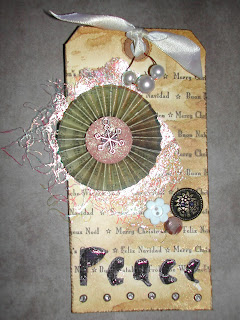 I used the same colours for the tag as Tim, but used glimmer mists in walnut gold and honey amber, and a hero arts background stamp.
Instead of tinsel, I used angelina fibres behind the rosette, and some more of the pearls from my former necklace.  The ribbon is actually self coloured with wild honey distress and glimmer mist (honey amber, I think) but the flash makes it look whiter than it is.

I used some randomly chosen buttons from my stash and had to hand-draw (badly) the letters for "peace" but I did have the core-dinations paper. They look better in the picture here than in real life.... 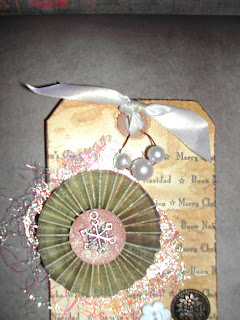 All in all, I really like the tag - I would have used chip letters but didn't have any small enough as it would then look much neater. I decided not to buy the alphabet die (so far.....) as well!

Artyjen is away for her birthday, but the link for the splinter group is still available here - check the other tags out.
Posted by Helen at 22:06

Great job on creating your own Rosette Helen, fantastic. Great colours and embellishments too. I really like this tag. Tracy Evans x x

Oh thats lovely :D
The die is good, but make sure you have the plates for it LOL
Julie xx

oh hun this is gorgoues love your rosette its brilliant,hugs cheryl xxxx

oooh you little devil, fancy ordering the rosette.....hmph..am only jealous.....lol
Your tag is fab and your folding for the rosette is terrific. Love it. Annette x

This is beautiful - your rosette is amazing! I love the fibers you've used, the baubles - a very pretty and feminine take on the tag.

Wow your rosette is amazing! Love the whole tag.

I would not know you had done this with anything other than the die. Brilliant! You have made a super job of it.