Another great tag today - but with dies/fades I don't have - so more substituting. Tim used his snowman die, I had to stamp mine, and the stamp is smaller than the die, so he looks a bit lost. 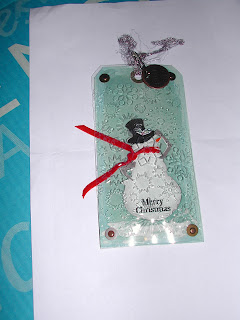 Anyhow - here he is! I stamped him on grungepaper (which then proceeded to bend a bit with the paint, perhaps that's why Tim used grungeboard.   dohh!!

Still, two coats of dabber later, and some cursing when the arms and hat wouldn't stick..... had to colour the nose with a gel pen because I couldn't be faffed to try and cut the nose out of grunge!

I don't have Tim's snowflake texture fade, so this is a cuttlebug one, but at least it's snowflakes - I don't think I've used it before, so am glad I bought it - way back when I got the CB!!

To stop the snowman seeming to float in mid air on the tag, I used some fluffy stuff for snow at the bottom. Attached the snowflake tag as per Tim's, and some embellies. Despite not having the snowman die, this is pretty much as Tim did - for a change.

Will link him at Artyjen's again.
Posted by Helen at 20:52

wow, i see u have kept up with the tags! i'm skipping all around, making like 3 or 4 of each so it takes longer! yours are all fabulous, they all look really similar to tims!!! great job! and glad to see someone else making a mess of their crafty space ;) im still chugging along!

wow you are truly keeping up well with these challenges Helen and this is a terrific tag. Enjoy the weekend. Annette x

oh wow hun this is just brialliant love what you have done,today hugs cheryl xxxxx

Helen your tag is great. I just love your snowman - he's so cute.

Nothing wrong with a hovering snowman lol, i like that the light reflection at the bottom practically makes him looks like he's taking off te he he
cant believe we only have 2 more days :(

Great job with improvising,Hes a perfect size for your tag. I have none of what he used either, I hope to get mine done tomorrow.

love how you have created him:)) haven't even done mine yet!

Am just surfacing and getting round to looking at blogs. Great job on this one (not tried yet myself)- I think it looks great and not as if he is floating at all.
Love the clear embossing folder effect - must try that out on a card some time.
A brilliant tag! Now to work backwards and look at some more.

Hi, just been exploring your blog and been thoroughly entertained! Sounds like you have fun with your craft!

Hi Helen, thanks for your kind words on my blog. I hope you are having fun with the day 11 tag and you figure out what you are going to do with it! :D

I think it turned out fantastic, Helen, and you know what? I kind of like that CB snowflake folder better. GASP! Great work!