Well, Tim certainly packed in some techniques to his first tag! When I saw it at work, when it posted around 8 o'clock, I was stumped - I mean, I don't have any of the major items he used!

So, when I got home (early, because I have a stinking cold, - honest I do, it isn't an excuse - if you will pardon me saying, I am dripping everywhere!!) I couldn't wait to get started.

This is what I came up with.  It is a very wonky photo, sorry! 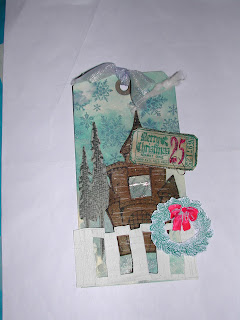 I don't have the rickety house or the picket fence die, so I used a Paperartsy castle stamp which I coloured with distress inks and put through a cuttlebug folder "branches" I think it's called - to create some texture.  I found my mica tiles - I knew I had some and suddenly knew which drawer they'd be in - so that was the "window" created - Leandra's castle doesn't have a window but I cut out one of the "walls" to improvise!   I used a white Inkessentials pen in the embossed grooves, as I forgot to paint the grunge white before inking it.  The fence is an Art Impressions stamp, I should have used grungepaper but used card so it's a bit fragile!  I cut the holes with a craft knife and covered it in picket fence distress.  Improvised the wreath with a stamp, used Tim's pine trees stamp instead of his fab branches. There is meant to be fluffy stuff along the fence and the top of the roof,  for snow, but I forgot, till it was all assembled!  Blame the cold. 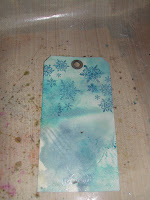 The background is made more or less as Tim did, although I used marshmallow glimmer mist on the inks on the craft mat as I don't have any perfect pearl sprays (yet...) and his small snowflakes stamp 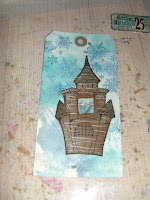 Here's the "house" stuck to the tag, with the ticket in the backgrouund, ready for attaching.

I hope I do better with tomorrow's (if my cold is better, as at the moment I feel rotten, so will be going to bed early and hope I get a decent night's sleep, unlike last night)
Posted by Helen at 19:55

Gosh you've been quick. It looks fantastic. I've not finished mine and have given up for today, busy watching Corrie xx

you have been quick hun I too have none of the dies,but boy you have done an amazing job here hun,just brilliant,hugs cheryl xxxx

I LOVE it!! it is so brilliant.. now all you have to do is join ArtyJens splinter group.. her link is on my blog if you haven't got
xx

I love this and I love the fact that a lot of us don't have all the Timmy things and are making it work still.
Look forward to seeing your tag tomorrow.

Loving that castle Helen, and a fab tag. Annette x

Well done you. Especially as you have a bad cold. Hope you feel better soon. Hugs JO.xxx

Beautiful! And with a cold, and runny nose to boot! lol! Love what you substituted, that's what it's all about!

what a great tag, I love how you used the castle as the house ! I don't have the Tim stuff so had to improvise too !

Oh this is fabulous! I love the twist of the castle - so creative, and I love how you've used what you had to make a perfectly beautiful tag! Hope you feel better soon!

Helen, sorry you're not feeling well, but by jove, you've done a great job without all the Tim bits. The castle idea is awesome, am in luv with this! I used the marshmallow mist, too, how fun was that? Hope you're getting a good sleep. Hugs

Wow that is gorgeous hun.Yopur quickI havent got the dies nearest thing is shed die cut which im at present trying to alter.Tag 2 will be here before i get finished tag 1...lol
hugs judex
p.s i will pop back later to see tag2¬

This is so cute :D what a fab interpretation :D
Julie xx

Love your version Helen! It's brilliant!
I have the lurgy too - cough splutter sneeze! Hope you're feeling better today!
Alison xx

Looks great, Helen. The castle was a superb idea!

Well I haven't seen Tims but yours is just gorgeous Helen :)

Just fabulous and i'm so enjoying seeing everyone's creative improvising. Yours are very clever and work so well.
x

Your tag is wonderful! The trees really work in the background and the wreath looks great. Good luck with your cold. Mine has been hanging on for weeks.

A great take on the tag Helen, the castle works well

Great version of tag 1, especially your wreath and the castle :)

What an ingenious thing to do - use the Castle from Paperartsy. Lovely tag Helen.