This week's Play Date challenge has 5 colours - dark green, white, lilac, orange and dusky pink; inspired by Sarah's sister's garden design.  GULP!  So most people probably thought straight of flowers, right?! But I wanted to do something different.

When I was reading the Saturday paper, there was an article about the artist Mondrian who uses bright bold blocks of colour and whose work I love.  So I thought maybe I could do something  - very very vaguely - along those lines - in the challenge colours.  I have several Hero Arts shadow stamps of various sizes but decided on just two - an oblong and a small square.  I rummaged around in my drawers of ink pads and found the green, orange and lilac but was really struggling for a dusky pink.  I decided the gaps I'd leave would count for the white.   I took a piece of thickish white card and played around with the inks, adding a few black for some contrast (not sure whose stamp that is, there isn't a label).  I left it overnight, not sure how to finish it for the challenge. 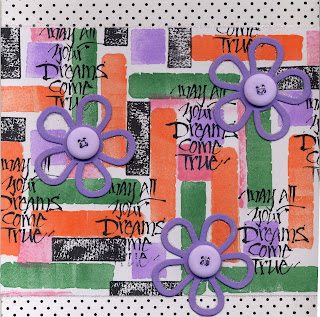 Until a few hours ago the piece didn't have any pink in at all and I was going to throw in the towel, then I found a Rangers Antiquities inkpad called Chinese Red - which isn't red at all, but pinkish. It's a bit tenuous, but I hope it will do.  Then I had to decide what to do with it - it measured just slightly over 8 inches by 6 and a half,  I overstamped the "may all your dreams" by Penny Black randomly over the card and spent some time trying to find something to put on top - I couldn't just enter a piece of home-made background paper!!  Eventually I decided to trim it to fit an 8x8 inch card (yes, another one) which I covered with a piece of white/black spotty paper.  I found some retro bloom chips (Craftwork cards) which I painted with Claudine Helmuth purple palette paint and when they were dry, stuck on some lilac buttons that I had threaded with lilac glittery thread, added a bit of glitter and "done" as Gordon Ramsay would say.

I've turned it into a birthday card for my best friend Claire for later this week. I hope she - and the Play Date Cafe - like it!!
Posted by Helen at 20:09

Blimey! (Can I say that, legally, even though I'm an American?) I think you did a STELLAR job, with all those colors! Yikes! That was quite a challenge, and you handled it beautifully!

Fabulous job, Helen! I think your friend--and everyone at Play Date Cafe'--will love this!

SO VERY CREATIVE! What an inspiring way to use all those colors!

Great to have you once again in The Cafe : )

Thanks for taking the time to look at my card, Helen!! I think you managed to capture all the right colours on your project. Great work!!

Gosh you have some wonderful and imaginative work here.

Great use of the colours Helen!

Fabulous take on the challenge!

Oh wow that is wondeful, Love how you have worked the colours. Kim