This week's colours at the Play Date Cafe are a bit of a challenge in more ways than one!  They were inspired by this picture of Italy - somewhere I've never been (I am not widely travelled, unfortunately!) 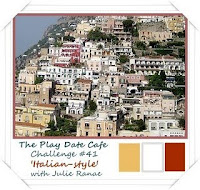 I was originally thinking of a different stamp altogether (maybe Ill do that one later!) but when I went to take it out of it's drawer, I found this one by Toybox (no idea what it's called, it doesn't say on the stamp) instead. 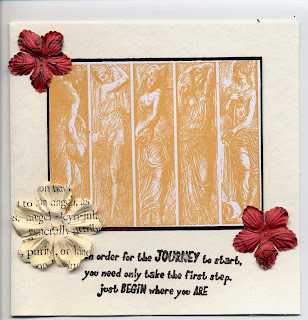 I used Colorbox chalk ink in amber clay, on white cardstock, mounted it on a piece of black card which I spritzed with a red pearly reinker mix though there isn't enough of it to show here, I don't think, and layered that on my off white card (the box of cream cards was right at the bottom of the stack of my boxes of card stock...I had to move 5 boxes -  aren't they always at the bottom!)

I used a couple of prima flowers in brick red and the cream one which is pre-printed with the "angel" definition for accents and stamped the Wendy text at the bottom.


I really like this stamp, and the colour of ink reminds me of sandstone, which seemed kind of right for statues and the challenge. You may not be Dr Who fans (not sure if it's made it to the States, actually, for the internationals among you) but a couple of years ago there was a great (scary!) episode called  "Blink" where these Stone Angels came to life - and the images on this stamp remind me so much of them!! I Googled it for a pic -see what you think. Course, they're not a nice warm yellowy colour, but in my mind they remind me of the Stone Angels!    Ok, it's just me then!

Love the stamped image, there is so much fine detail on it, gorgeous. Works really well with the colour combination. Tracy Evans x

What a great stamp! Love how you've worked our colours for the challenge! Great card! Thanks for playing along with us at the PDCC!

I saw that episode Helen, it was quite scary but yours are not at all, love your piece. And yes I am blog hopping at this time of the morning - don't ask LOL

Beautiful stamp! Thanks for playing at the PDCC.

oooh geat colours, and Toybox stamps take me back to my early days.. hugs from *the boss!*
rofl

Ahhh my kind of card. Simple, elegant and with a perfect use of space. Px

No it's not you! I thought of the stone angels as soon as I saw this :D Brilliant I love it Helen. And the 'new' Doctor has ahd a brush with them too hasn't he ;) Repeating that episode this week I think on BBC3. That image is fantastic.

BTW that is the only Dr Who monster to freak Craig out. He hates them *g* He who loves zombies and gore and wotnot is a scaredycat when it comes to stone angels! Teehee!

No not just you! Fabby stamp makes a great card :)
xoxo Sioux

Love love love it! Great images and the colours are beautiful.

This is gorgeous! I love it!

Love this, its very original and a clever card too
I have a new challenge at my Dezinaworld blog if you fancy a go but if not, just keep on making beautiful art
Hugs June xxxxx

This is lovely and YES it does remind me of the Angels from Dr. Who!

Lovely card Helen! I think that episode of Dr Who was the scariest I've seen, still makes me shudder thinking about it! Lol! No stevenage for me, saving the pennies for all those september shows now! Have fun!
Alison x

Lovely images and great design. Thanks for joining us at the PDCC this week. Lovely card!

Super card Helen. Great choice of colour for the stamp. I haven't watched Dr Who since I was a child... I never got over my fear of darlicks!!