Got home a little while ago from the Stamperama stamp show at Stevenage... Great to catch up with some friends, but the show wasn't as good  big as it's been in the past, and some companies were missing who should have been there....

Still good to see Paperartsy of course, where I started with a make and take using infusions and distress oxides.. 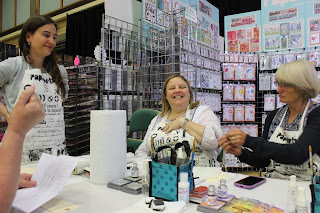 taken by Racquel (standing)  and using her stamps for Paperartsy  - great to catch up with Miriam and Wendy who were both there, we grabbed the first make and take session. (tag in stash photo later on) 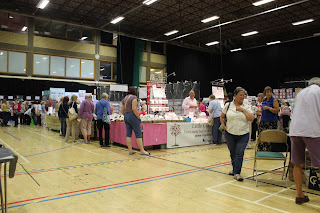 Lin and I stopped for an early cuppa and Lin had breakfast, couldn't believe how empty it was - this was about 10.30 ish, normally it's really busy first thing.. 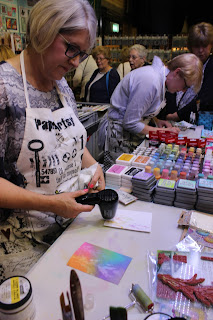 back to Paperartsy for some quality demos and chat, Leandra experimenting trying to seal the Oxides to make them permanent... sort of worked!  I'll leave it to her to share her secret some time! 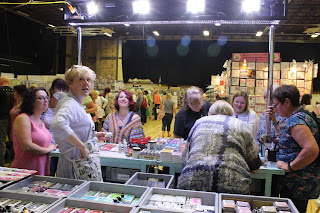 Realised I hadn't taken many photos...so snapped a few quickly.... Lauren was also on the demo stand with Leandra, was great to catch up with Claire (red tshirt) Alison in her fab crochet top, and Miriam watching Leandra... 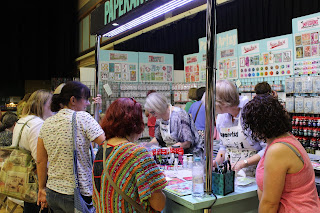 backs of people deliberately not turning round...great to also catch up with Jo V (with the ponytail) 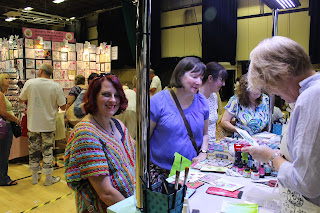 and great to see Lucy too, even if only towards the end before I left 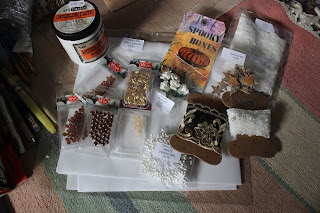 and a very small stash haul... although I have already got the Prima modelling paste, I was hoping to get the Golden one we'd used on the fabric workshop but Leandra had taken the Prima stuff instead and I didn't realise I had it already... some beads for the book and some lacy trims for the book...
No-one had a big gelli plate there so am about to go order one online!
Posted by Helen at 18:58

Thankyou for letting us into the show Helen. Great to see all our friends there. Tiny stash but very intriguing. Look forward to seeing your book when it's finished! Xx

Nice summary of our day. Was lovely to spend some time together again and have a catch up Xx

It was great to see you - where would we be without the #patwits..... worth the journey that's for sure! Great haul.... we were both very restrained!

Gosh, it looks totally dead doesn't it and I can't believe how much you didn't buy - lol xx

It was great to see you too, Helen xx

Lovely to see you today Helen! Some great photos as usual! I only had a little bag of stash, mostly the acrylic inks :-)
See you at Ally Pally!

It was lovely to see you there Helen (and everyone else)! I couldn't see much of the show... Just the PaperArtsy Make and Take area, so thanks for sharing your experience. I think today I'll dream about mushrooms, LOL... I don't know how many tags I've done after your visit. But it was super fun! See you at Ally Pally! :)

Thanks for bringing the show to all of us!

Looks like you had fun, it does look very empty though. Thanks for sharing xx

Looks as though you had fun even though it was quieter than expected! Err…that is a surprisingly small amount of goodies!!! Hugs, Chrisx

Oh yes, very restrained for you Helen but pleased you managed some photos. Glad you were able to catch up with a few PAtwits bin sure you all had a lovely day. We're Clarity there? Barbara generally has the full range of gelli plates. So pleased you're dipping your toe in the water now!

That's a minimal haul indeed - sorry to hear things were so quiet, though I guess what with summer holidays and all...

Looks like you had a good time nonetheless, and I love your pumpkin tag. I've been using MicroGlaze to seal the Oxides - works for me.
Alison x

Oooh! Can't wait to see what you do with your gelli plate when it comes Helen. Maybe I should get mine out and have a play though it's not a giant one - I never knew there was such a thing!

Despite the thin crowds, it looks like YOU had a fun time. Glad you shared this with us, dear. I hope you like your gelli, because I have never cared for mine. Be aware, you need LOTS of room to set them up and print.

Hi Helen! Lovely insight to the show. I have never been to that one but I hope to go one day. Thank you for your lovely report! ☺️

Thank you for the fun pics Helen, you look to have enjoyed there and your new stash is always amuse me. xx