Glad you could make it back for another WOYWW - can you believe it's going to be November on Saturday?
I haven't done a  great deal since you were last here - although I have made 2 whole Christmas cards!! 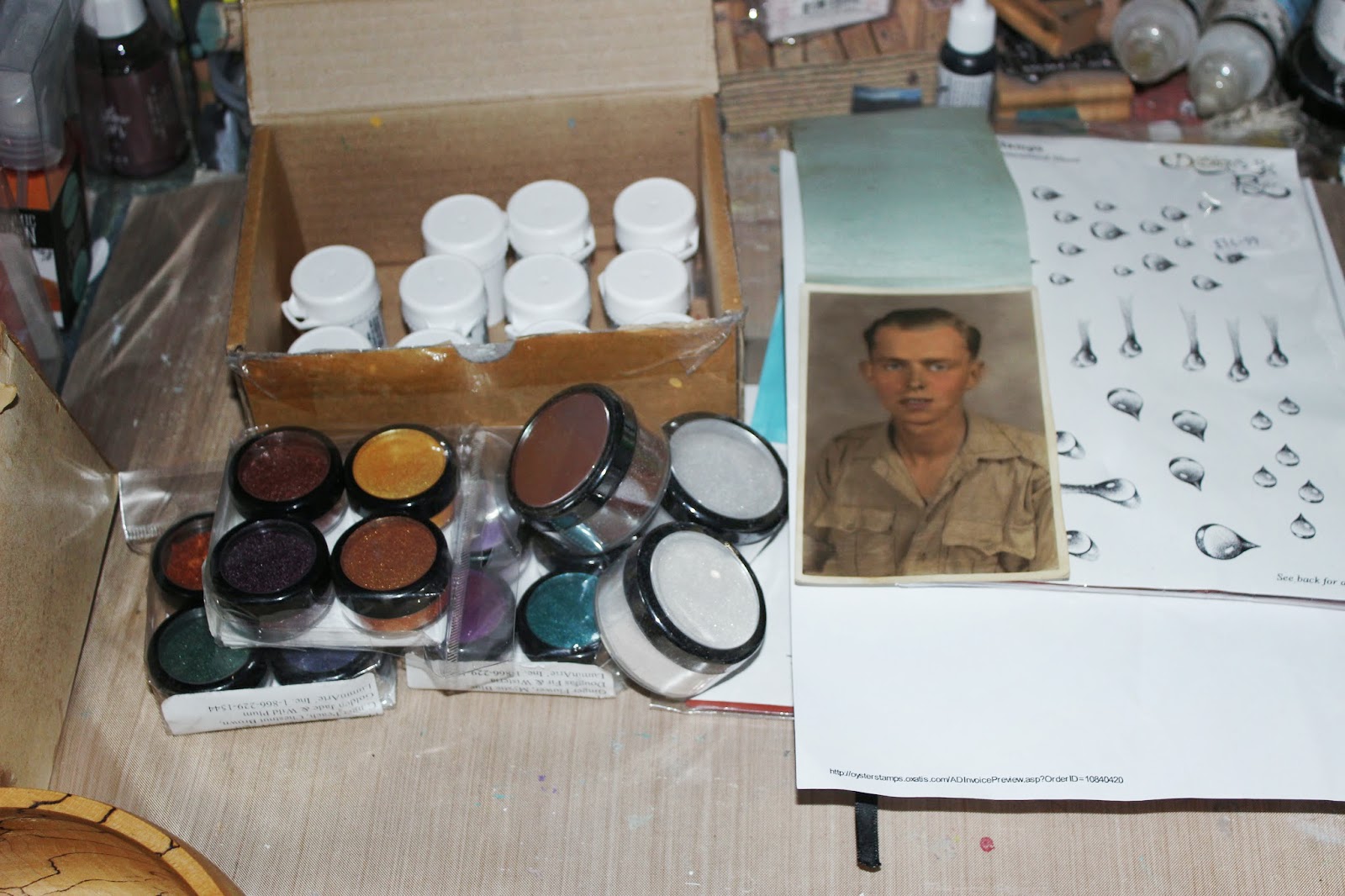 The eagle eyed Elizabeth spotted some new mica powders last week which now are on the work mat, together with the brushos which arrived, although there's one missing I realised when I put them in this box - I have contacted Oyster Stamps to query this but not heard back yet. The raindrop stamps are fab, aren't they- just need to mount them up now, and I've run out of EZ mount...which is fine, as I hate mounting stamps!

The photograph is of my Dad, taken in Christmas 1942 - we've just about emptied the house now and it's about ready to go on the market, at the weekend my brother and I went down and I brought back a box of old photos, and this was one of them. He was serving in the Navy; in Egypt at the time I think, when this was taken.

I hope to get some of the old photos scanned so I can (when I sort my printer) make some copies... another job to be done!
So, that's me - another fairly blank desk, so I'll let you back to Julia's for the link up and some more fun desks to visit.

Those dripping drops appeal to me! Nice pic of your dad. My Gramps was in North Africa. I need to root his pics out now that you remind me! Hope you get your printer sorted. #4

Great new stash to play with shame your missing one. Lovely colours you did get I gave up on ez-mount now I just stamp on a softer surface :)
Happy WOYWW hugs Nikki 6

Tough emptying a parent's home ready for sale. Hope you can have some quiet crafting time this week.

I'll be interested to hear how you get on with your complaint - to be honest that shop gets blasted on UKS for poor service pretty regularly so if you do get it sorted that would be good to know. And now, my answer to your question in the comments: The bigger than A4 size (works for a scrapbook page border, for example, at 12 1/4 inches) is I think 5 sheets for about £6. I still think for certain things you could add it in strips rather than full back coverage, and maybe even add it after die cutting to conserve it, but I keep finding things to do with the waste bits so for now I'm doing as they suggest. And really, it is HANDY for any die cut but not REQUIRED for all of them. I wouldn't waste it on a circle but now I don't think I would want to stick text any other way. Coming round to visit you in a minute....I may copy this over so you don't have to come back to read it :)

cheers! And I love the green card BTW.

Hope all gets sorted for you. Great picture of your dad - my dad was in Egypt, too. He was there later than 1942, though. Spent Christmas Eve one year travelling up to the shepherd's fields at Bethlehem, and spent Christmas night there. He was with REME.
Take care. God bless.
Margaret #16

Fiona@Staring at the Sea said...

What a great photo to have of your Dad. Little treasures like that make the house clearing a bit more bearable. I'm joining you on the floor this week!

Pleased your going to copy the photos from your dads... Will you do a little album or something??? Any plans ???
Jackie 15

Hi Helen - hope you manage to sort out the missing item mystery - always frustrating when that sort of thing happens, eh?! Glad you found the photos, and look forward to seeing what you do with them. Have a great week, Chris # 24

If you don't hear from Oyster contact them again, I know they have been doing back to back shows for ages now.
Love the Ryn stamps - I still have none myself - now this is not on I must get some.
Take care
Hugs, Neet 29 ish I think

Wonderful image of the Egyptian campaign wow what treasure old photos are eh?
And a good idea to scan them love your crafty new treasures there too :D
happy WOYWW Shaz in Oz.x #25

Like the drips stamp! It's amazing how effective that is when I've seen it on other's blogs before now. Have fun playing with this powders too...hope the kissing one turns up!
And lovely pic of your Pa too, mine was in the RAF in Palestine...he looks like Cary Grant in his pics :-)
Hugs. LLJ 28 xx

Oh the micas look fun and what a gorgeous photo hun!

I love the old pic of your dad. I have lots of old family photos that I need to do something with but really don't have the time to attack them as yet.
Have a fun week.
Hugs,
Annie x # 26

Yay, brusho inks! You'll love em, hope you get your missing one sorted quickly. Look forward to seeing you use that beautiful image of your dad in a project

I love that you found this photo of your dad! I am always so happy to have photos of my family. It seems they have scattered to the four winds after all these years.
Glenda #33

G'day Helen. Happy WOYWW. Oh you can never have enough mica powders I reckon...I love them. What a lovely photo of your Dad and your Christmas cards and gorgeous tag below are awesome too
hugs Annette In Oz #12

What a lovely lot of goodies! Have been thinking of acquiring that raindrop stamp - could be useful with our weather!
Love the photo of your Dad.
BTW Love the idea of making a journal of my honeymoon mementoes, thank you.
Bishopsmate #42

Hello! Are your mica powders like Perfect Pearls?? You have some gorgeous shades! And yes, I LOVE those raindrop stamps!!!

Darn! I am going to have to get brushos! Love the pic of your Dad - have a similar style one of my Dad - who also served in North Africa and then went up through Italy-which he loved! Hugs, Chrisx 38

I was enabled by Shaz some time ago to invest in the Ryn droplets stamp" one of the best of my WOYWWIng finds!
love the colours of those powders, really rich. Gosh, aren't you like your Dad! what a marvellous photo. Bet it's a relief to be nearly finished at the house, well done you two!

Oh Helen, I spent 4 months cleaning out my parents home, and there is still items there. No luck on selling either. Good Luck with yours. It's an emotional event. STRESS to the MAX at times.
Good photos and that was the fun part, but some we cannot identify. Have a relaxing weekend with the trick/treating happening. Thanks for the visit.

lovely goodies to play with. Hope you get a result re your complaint. lovely photo of your dad. Thanks for popping by. Anne x #18

You are exactly 2 christmas cards ahead of me :-)
I love your workspace, nice things to play on it
Cheers
Gabriele 31

Hi H well you didn't disappoint with the new stash this week..... mica powders and brusho paints.... I hope you get to use them soon
janet #17

Hi Helen,
I absolutely must have those raindrop stamps!
That's a good photo of your Dad. I know about the clearing and sorting ... I have half a garage full of stuff I can't bare to deal with.
Have a good week,
RosA # 19

What a treasure to find, I love old photos and make sure to find as many as I can of the family. Get your photos printed professionally because the quality will last for 25 years + but home printing will deteriorate after 10 years if you are lucky. I must check out those brushos and masterboard too. Sorry I am getting back late, DD stole my computer yesterday and I didn't want to visit on the iPad.

Hugs Eliza & Yoda #9
Thanks for visiting and happy WOYWW

I hope those people reply and send you the missing brush. With all the social media around these days you'd think shops would jump when something goes wrong. I love those rain drops, maybe I should try and get some of those stamps. Your dad looks quite dapper in that photo. Have a great week,
Von #11

Great photo of your day. I love looking at old photos. Bummers on something missing from your shipment. Creative Blessings! Kelly #52