Hels has set a challenge today for Sunday Stampers to use red or blue - in fact, she hasn't, at all, her friend Dan has. Hels, I hope your back is better!   We were even allowed to omit stamping this time, as Hels had shown us something without stamping.  I thought, no chance!

But looking at this when I took the photo, I did nearly manage it.

Anyhow, as Liverpool are doing their current normal frustrating thing by not winning or even playing particularly well, I have had a bit of a play.

Some time ago (again!) I bought some jigsaw pieces which have been sitting in a box, unused.....) On a blog surf somewhere I saw some used to great effect and so today pulled one out of the pack. 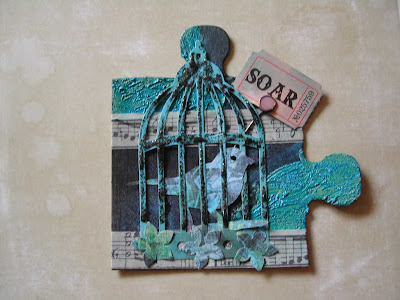 I started by painting it black with a paint dabber, splodging some Terra in a couple of corners and then stamped a small script stamp into it, (this is all the stamping there is!) Once dry, coloured it blue (a Nick Bantock ink this - though it's come out a bit greeny) spritzed some blue DI/perfect pearl mix over it, and some blue goop (inka gold paint in steel blue)


it sat there a while, during the Grand Prix whilst I pretended to decide what to do next.   In the end I decided to cut out the bird and cage alterations die on a piece of Lost and Found paper - it has a lovely flower pattern on one side, plain bluey-green the other. Punched a few flowers out of the leftover piece of paper and stuck them to the birdcage. 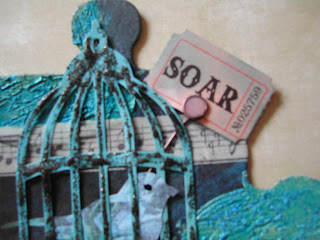 Used some tissue tape, an adage ticket and memo pin for final accents, and some walnut stain distress stickles on the birdcage - probably should have let it dry properly before trying to photograph it and blog it!
Posted by Helen at 17:19

Gorgeous - I've seen those jigsaw pieces but wondered what to do with them so didn't buy any. Yours is just lovely.

Oooh, yes, very yummy, loving that texture hunny... thanks for joinin in with the Sunday sTamper... am having inordinate problems with Mr Blogger.. been trying to comment for like three years now ROFL.. you will probably get this message a hundred times! Thanks for the message about the back.. nope... worse if anything *sob* :O( Hugs hun x

Love the texture on this piece and the colours work so well. I really love this birdcage die, am using it all the time. Great piece. Have a good evening, Tracy Evans x

Love it! Just love that texture. And very creative use of the puzzle piece! Well done!

what a sweet puzzle piece. I have some and never think to pull them out!

hi Helen, how are you? I love your blog, Can I ask a favour? you are always so good in getting your WOYWW link up so fast, could you help me do mine, I always miss it because I have to start work early, if so, I would be greatful

Two of my favourite crafting things - altered jigsaw pieces and the birdcage die - yours are fantastic!

Stunning! Nice way to use a jigsaw piece. PS - tea dye is the only DI that is still on my list to purchase. Got a chuckle out of your earlier post :)

Great piece - Glad you got it out of the box.
And good to hear I'm not the only person who buys things and puts them in a box because you just know they'll be useful ...hmmm ...later.

hey your blog design is very nice, neat and fresh and with updated content, make people feel peace and I always enjoy browsing your site.