And in the blink of an eye, it's another Wednesday gathering for WOYWW  at Julia's Stamping-Ground 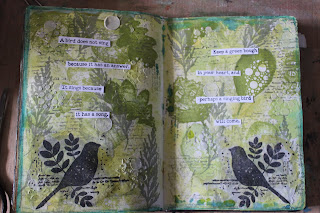 On Sunday afternoon, whilst waiting for kick off on the last Premier League game of the season, in an attempt to steady the nerves, I went back and finished this journal page from a few weeks ago.  I could only take 5 minutes though!

Didn't help, as Liverpool still finished second (so close, so close...and it was always going to end up that way)  but what a season!  (trying to convince myself here!) 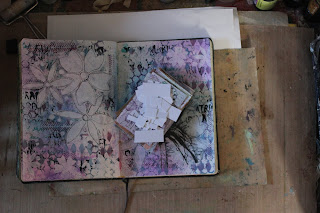 haven't done any more to this journal page, and the pile of now assembled but not quite sure if they're ready, 10th anniversary atcs are sat on top (so I don't lose them)

carefully hidden by a pile of spare bits so you STILL can't see them!! 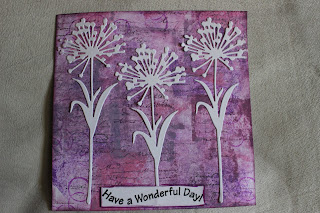 I also made a birthday card for my cousin using die-cut flowers and distress oxide brayered card base.

stamping on the base for another layer of interest

there would be new stash but it hasn't arrived yet.. ordered a couple of dies (blaming Angela totally for the TH flowers she used on her Masterboard Monday post - so hopefully that means they'll be here to play a starring role in next week's anniversary edition - seems fitting somehow - Helen, with new goodies!

I just read Julia's reminder post about the WOYWW crop on 1 June (here )  I will be begging Margaret, who I am staying with, to not throw me out if I listen to Liverpool  in the Champions League final on the Saturday night, on the radio.  They are my first love, Liverpool, before crafting even entered my head... so it will have to be done!!

last week's Kew visit can be seen here... my floral loves (alliums) are in abundance now!  I'll risk sneaking one in to tempt you over. 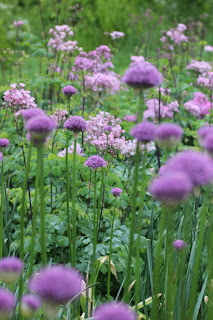 Catch you at a desk near here very soon.
Posted by Helen at 00:00

I will be listening to the Champions League final as well Helen, willing Liverpool to win. I was so hopeful when Brighton went ahead against City... Love the finished journal page. Happy WOYWW. Sarah #?

I had intended to get by sooner, but I was still visiting my T Tuesday group. Sorry to read that your team didn't win. I know the feeling. From the teeny tiny bit I could see of your ATC, it was still SO MUCH BETTER than what I made. I had limited time and was working in between baling water in my basement. I hope you have a great time at the Crop. I know you love to attend and I will be there in spirit, at least.

Like you, I have no # yet. Julia must have slept in because she know I was tired and wanted to get to sleep (NOT)!!

I did sleep in a bit! Unintentional but very nice! You did a good job on your nervous page, it looks great. shame about Liverpool, but boy what a great season. F1 could do with some similar shake up to make it as interesting! Super impressed that your ATCs are ready, mine are a bit of a WIP!!

Nice journal page and well done on finishing your atc's well ahead of time. Mine are done but not as happy with them as i could have been but at least they are done. Might do one more for my PIF and then call it a day. That will be after Saturdays workshop so lots of time then.
Have a good week
Hugs, Neet xx

I understand your pain regarding the footie Helen, my MIL is a Liverpool fan it caused some issue's over the years as my Hubby was born & bred in Manchester and decided he wanted to be a Man U fan when he grew up, you can imagine the uproar hee hee! Fab page, love the birds image. I have those dies Angela tempted you to, look forward to seeing what you create with them.
Happy WoywW Tracey #4
P.S Beautiful Aliums x

How nice to have a go to thing when the going gets tough Helen haha. The card is lovely and so beautifully made
Lynn - 12 x

Nice journal page, Not a football fan muself give me a good game of rugby,
Happy WOYWDW lilian B #7

What lovely photos of your journal pages. I also love the card and the colors are glorious! Happy WOYWW
Glenda #19

Wonderful work on your desk. Fancy having your ATCs made, Helen, eeeeek! I somehow thought there were two more Wednesday to go, born optimistic outlook that one, or an Ostrich!! 😆
Love both finished pages Helen, but especially the mauve floral trio, it’s gorgeous.
Happy WOYWW, Shaz in Oz.x #20

Hi Helen, great pics of the pages. Good pile of ATC's too. Love Alliums too- I have quite a few starting to flower now, I bought a load of bulbs back in the Autumn. See you in a couple of weeks, Have a lovely week, Hugs, Shaz #15 X

I'm not a football lover really but am married to one that is so it doesn feature in my life at times lol. I've made ATCs for the swap and other little gifts for the crop [but there may still be some ATCs around for those wanting one].
See you soon.
Hugs,
Annie x

No football here, just snooker and F1..... I'm sure Margaret won't mind the radio on.... might be able to convert her.....
Love your latest journal pages.
Christine #25

I was the same Sunday, the first fifteen minutes with the City updates were encouraging but then it all went pear shaped. Every time I have 'so close' moment hubby and youngest son yell at me and say we're in the CL final, what you moaning about.

Hi Helen, sorry about that but the dies are lovely and I have more ideas myself for using them. Your journal pages are fabulous. I know I keep saying it and doing nothing about it but I must get round to doing more in my own journals it's just that other things keep getting in the way. I really wish I could join you all for the crop but it's a difficult time of the year for me as hubby still does moderation for two exam boards and so I have to be around to look after the dogs. I will however be with you all in spirit and look forward to seeing what you get up to. Sending big hugs, Angela x14x

lovely journal pages! thanks for visiting

Lovely art journal work. Too bad about your team. I always think it is so nice when the least likely to win does just that!! Spent some time with my dear granddaughter watching her and her team play volleyball. They are contenders, but they just miss those winning shots. Keep cheering, smiling and creating.

HI Helen, I love the textures you got with the brayer on the card's background :) and hmmm, maybe I should not go poking about to see what these flowers look like. ( the willpower is low at the moment) :) ~Stacy #29

always fab show of artwork on your blog...
Darlene #31

Love the finished journal page, and am intrigued by the partially hidden ATCs. Happy WOYWW. Have a great week. With love and God Bless, Caro x (#18)

Hi Helen, you've been busy, those projects are all really pretty, looking forward to a peek at your ATCs next week. I especially love the journal page, that quote is beautiful, must write it down. Have a great week! Annie C #11

Hope those of us that can't make the crop, will get to see all the lovely ATCs people are making.

Your card is lovely.

Off to check out your Kew photos.

Hi Helen, great journal pages. I love the colours on the one under the ATCs. Aww, teasing us to a partial sneaky peek! I'm not much of a football fan, although I have been to a fair few matches when Blackburn Rovers were a Premier League side, courtesy of corporate entertainment. Thanks for stopping by earlier, looking forward to meeting you at the Crop! Have a lovely week Heather x #7

Beautiful pages and card! I have always followed my middle son's team, Liverpool and my Grandson joined his Dad...but married to a City supporter.....you can imagine the atmosphere!! (Grin)
Still hoping to get to see your Kew posts soon! Looking forward to the Crop! Hugs, Chris33

What beautiful pages! And I'm looking forward to those ATCs when people can share! The birthday card is gorgeous, love those dies! Thanks for popping by! Have a great week!
Carol N #27

The art journal pages and card look a treat. Love love love the alliums which seem to have influenced your earlier projects. Thanks so much for the lovely comments.
sandra de @23

Such fab colour ways in your work but then I see the allium photo and know where your inspiration comes from!! xx Jo

Lovely journal pages, I really like the one with the birds! Thanks for your visit, Helen! Lindart #26

These all look wonderful and visually captivating! Thanks so much for your visit yesterday - will see you again next week! zsuzsa #21

Simply in love with the bird page - all those lovely soft greens and the layered leaf stamping - enchanting. And the floral page and card are really pretty too - you must have been inspired by the colours of those alliums.
Alison x