It's Wednesday (well it will be when this publishes..) and that means it's time for another snoop at our workspaces... the Stamping Ground is the place for the info/linky

Despite my taking part in the the Everything Art "Wanderlust" course, there isn't a lot happening on my workspace this week... I have, though,  "re-purposed" an empty hamper that wasn't wanted at work... 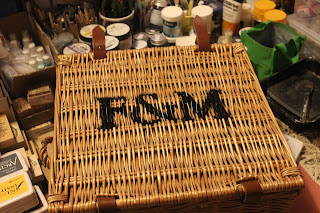 it came from Fortnum and Mason's at Christmas and my boss persuaded me to have the empty hamper... I resisted for a while, but in the end couldn't say no! 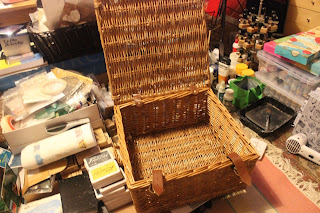 it opens nicely with a couple of leather buckles and is a nice size as you can see...
No idea what I'll store in it yet, or where it will go when I decide what to put in it... as you can tell I am seriously running out of space!

Hopefully by next week I'll have completed (started!) my second week's project for Wanderlust and there may even be some art to share for you!
I spent much of the weekend watching Periscopes (live phone/video streaming ) from CHA, the trade show in the States, (became somewhat addicted; another reason not much art got made!) looking at all the new products that are being launched soon... my poor wallet!  Didn't catch sight of our own Neet who was visiting the show though.

Oh, now that wouldn't have taken much persuasion for me! What a fabulous hamper... be very useful as storage - I'm sure you'll find somewhere for it to perch! I might have to give it a wash or two of Chalk paint though...

I've got folded, gesso'd pages which have been waiting on the floor of my room for four days now for me to have time to get to the next stage of Kate's journal... hope to get there soon!
Alison xx

I like that hamper and am sure I would not have turned it down, either. Given enough time, I'm sure I would also find a use for it.

Have a great WoYWW, and I hope to have a post up as soon as I take a few photos.

What a pretty hamper, I'm sure you'll find a use for it soon enough hugs Nikki? ?

Fiona@Staring at the Sea said...

Very envious of that beautiful hamper. I wouldn't have turned it down either! I like Periscope, although I haven't watched any CHA coverage. It's a popular platform in the sewing blogger world.

Oh Helen, I would have jumped at the chance of such a prestigious hamper - you lucky thing. I am so envious and what a great storage item it is - luxury for your stamping area.
Hugs, Neet (ready to settle for the night) xx 3

I've got several baskets like that Helen, all full haha
You are posher than me though with your F&M one
Lynn X 6

Maybe you can store some craft supplies in there clearing up some workspace? And I only managed to finish the first page also, still need to start the collage and the second lesson is a massive with making a whole book with backgrounds. Vicky #4

Lucky you Helen, it's gorgeous. Think I would start by lining the inside and maybe making it some dividers and pockets but that's just a thought. Have a great woyww and happy crafting, Angela x 17

So many options for that gorgeous little hamper...and of course the F&M on the front gives it that certain cachet!! It seems that CHA has opened up a few peoples wallets this week :-)
Hugs, LLJ 16 xxxx

Great hamper! will be great to see what you do with it! Lyns #24

What a lovely hamper basket - my stitching friend would love that for all her fabric.

Have a happy week of crafting.

I can't wait for all of those new lovelies to hit the stores ... buying frenzy! Have you got your eye on anything in particular?

Is it suitable for all your bottles of paint? Trouble is, if it's not big enough to start with......still, I'm sure you'll employ it somehow.! would quite like to have the foodie contents!

Looks like a few woyww's are taking part in wanderlust. It will be great to see what you decide to store in the hamper.
sandra de @15

I would've taken the hamper in a heartbeat! lol Although I already have quite a selection hidden under the spare bed :)
Have a wonderful Wednesday - and the rest of the week too!
Bubbles
#31

What a beautiful piece. I would love to have one of those for sure. It would hold a lot of supplies for sure!
Glenda #34

We used to keep out tent in a basket like that - it was always known as the 'Noddy Basket' and yes..... we always waved the tent goodbye!!!
That's a super basket and I am sure you will find a good use for it, if only to rest your art work while it dries!

Have a good week
Bishopsmate #41

Can't believe you hesitated even for a second!!! LOL ;)
Fab basket.
xoxo Sioux

Way too nice to throw out. The basket would be great for laces!

That's a really nice hamper. Can't wait to see what you do with it.

I can't wait to see what you do with your hamper, I've had one in my craft room for two years, I had two but gave one to my friend, son gets them as a Christmas gift from work every Christmas, I didn't hesitate when he asked if I wanted them!
Happy WOYWW
Jan no 33

I'm late, I'm late for a very important date :-) I've been chasing my tail all day but have now managed to get to check out a few of my fav blogs :-)
I really love your basket but I can't believe for one minute that anyone had to put your arm up your back to make you take it home. Have fun with it.
Hugs,
Annie x # 11

Hi Helen
Cute basket - lots of room for storing stash !
I haven't done Kate Crane's lesson yet - might do a bit of an adapted version !
Take care Ali x

Lovely hamper, of course you couldn't turn it down! It turned out so well, what a great idea.

Happy WOYWW to you, Helen!
:)trisha
#62 today with
rabbits

Lovely hamper, of course you couldn't turn it down! It turned out so well, what a great idea.

Happy WOYWW to you, Helen!
:)trisha
#62 today with
rabbits

Lovely hamper Helen! Great for stamp storage, I have one myself!
Alison x

I love that hamper! Bet it took you all of two seconds to accept it!! ;)

Hi Helen. love that hamper! I thought you were going to say someone gave you it full for Christmas :) Look forward to seeing what you decide to store in it. Have a great week :) Elizabeth x #51

Hi Helen
I didn't realise you could watch the demos from America. What a lovely way to spend your weekend!
Hugs
Lynda X 14

so many things you could do with that ! ave one with picnic stuff in it :) Thanks for your visit earlier . Have a greay week xx Soojay

What a great hamper - I'm sure you'll find a good use for it. Happy WOYWW!
Bernice #66

Happy WOYWW and congrats for the No.1 spot. I bet that hamper had lots of yummy stuff in it - have not been to F&M for years. So much potential now. I spent ages a few years ago watching CHA videos - my previous life of big crafty stash spender is over (after maxing my credit card!), so keep away from any temptation now. Ali x #37

great looking basket and lots of possibilities especially when people are paying lots of money for one like it. I spent some time watching live streaming but turned it off because I have so much stuff and don't need more. Reinforcing my resolution to use what I have not what I want. Hope you have a great week and thanks for visiting my desk earlier. Vickie #61

I feel like I'm the only one that didn't watch or go to CHA. So broke...

I love those wicker hampers - I have several that I store the grandchildren's toys in so I can easily grab one when they come to visit. And a couple of years back I made a big festive floral arrangement in a hamper I'd lined with fabric and trimmed with lace, for a Christmas display in a local nursing home
Jane

What a fabulous hamper - I'm sure you'll pack your stamps or paint bottles in it so you can get to them easily!! Think in this house Baxter may have got in it by now. Lol Take care Zo xx 37

Art Joy of Sharing with Peg and Shel said...

Nice basket. I must say I am addicted to watching CHA unfold too. Peg R 66

I kept a hamper for a few years but never found a good use for it... they are nice though!
Laura
38

What a gorgeous hamper. What a treat.
Thanks for sharing, and looking forward to seeing your Wanderlust art soon.
Hugs
Catherine
#67

Lol Helen, I had to laugh that your boss gave you the hamper - empty! How mean. He could have left you a tiny bit of foie gras! It's a great basket, though. The basket on my desk this week was from a much smaller "hamper" made up for us for Christmas by a friend - lots of goodies for us to enjoy.

Thank you for your lovely comment, and I had to laugh (again!) that the bit of my room that you particularly liked was the messy part that I haven't yet had time to tidy lol!! I'm getting there, but too busy (and then too tired) to really get on properly in there. Hopefully things will settle down soon and I can get started on some creative stuff again. So many meals out all together at the moment! My diet is suffering...

Happy belated WOYWW and thanks for making me smile!
Shoshi #21

'Ello! Taking my time to start browsing and blopping but here I is!

I'm rather envious of the F&M hamper - very nice, lucky you! I'm looking forward to seeing what you're creating at the moment, if you can tear yourself away from drooling over the new CHA releases. It's hard, though, isn't it?

Beautiful basket indeed Helen, can understand the dilemma in accepting it ..thanks for popping over and sharing your crafty space, Shaz in Oz.x

Another week flies by and here I am trying to visit a few Wednesday desks on Saturday!! Fab Hamper helen - hope you show us what you transform it into! x Jo

i am sure you have a long list of people who would help you with relocating that hamper, and I am no exception. It is gorgeous and yes, far too nice to throw away.
Maybe see you tomorrow!!
xx

Ooooooh! Missed this by being away! Err. ...you needed persuading!?? Hugs, Chrisx