Well, I did find this one hard!! However, I made a card using a Paperartsy plate which has several hats on!! 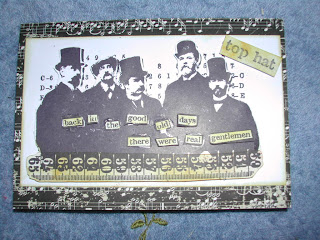 I stamped this several times so I could cut out bits and layer it up, brushed the edges with some distress inks and layered it on a card blank that I covered with a piece of 7 Gypsies paper. I 3d'd alternative words, just sticking the ones in between straight to the card, for added contrast.  Not sure if that shows in the photo.
The glue looks a bit splodgy!! Is matte accents meant to be much thinner than the glossy one?  Mine runs everywhere!!
There will be lots more - better - entries on show here and as usual a great prize up for grabs!

I opened a new black archival ink pad to stamp these fine guys - and blimey did I have trouble opening the ink pad - never known a pad so reluctant to let go it's lid.... I thought it was going to snap, I had to use a palette knife round the rim to lever it off in the end!
Posted by Helen at 21:33

Its looking pretty darn good!! its a tough challengne this week Im half way through one thing but might scrap it and start all over again. Yours looks fab as always
kazxx

Great image for this weeks challenge. I have started something but like Kaz I'm still thinking about it at the min, it's half way through but I'm not sure yet. Your card is fabulous. Tracy x

Terrific card Helen and loving those gents.........methinks the reason you had difficulty getting the lid off the ink pad is.....(drum roll..........)
'You are not eating enough Weetabix'....
Annette x

A great card Helen and beautifully put together. I also had a similar experience with an arcival ink pad - I'm obviously not as strong as you as I had to send it back!

Great card and great use of the Paperartsy plate! :) The Design Team are really pleased that you joined us for the Simon Says Stamp and Show Challenge this week - Thank you!

Really cool card, Helen! Love that stamp, great for this challenge! Thanks for joining the Simon Says Stamp and Show Challenge, and good to hear you got the lid off the ink pad! lol!

Great card Helen. The stamp is perfect and I love the depth you added by layering it up.

Lovely card Helen! Love the stamps you used and the colors you chose. The Paperartsy plate is perfect for this card! Thanks so much for joining us at Simon Says Stamp and Show Challenge! <3 Candy