Well, after tweeting first thing this morning that I was going to play all day - I didn't start till late afternoon!

The paper took longer to read than I intended, then I  - er - had a little snooze (to make up for waking on a beep beep Saturday at 5.30 am (same time as work days...) Anyways, I played with some tags.

Tried one technique that didn't work so you ain't seeing that! The I used the other side of the tag to play with the muted colourwash version Lin showed us at Stevenage (see earlier post) and sailboat blue and lettuce sprays. Love this combination - will use them again.
Stamps are by Wendy V and Tim. Some heirloom gold perfect pearl spray for some shimmer and this is what you get: 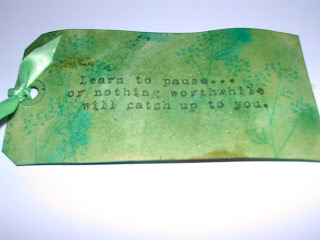 it's very wibbly-wobbly as there is so much spray/water and re-drying from the other failed side so it's not flat.... 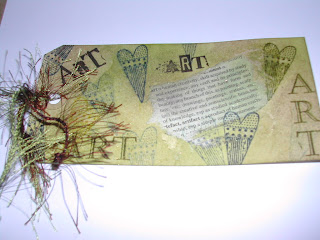 But this is why I named the post as I did. inks are pumice stone and bundled sage. Various "art" stamps  - two from Wendy and two don't have the manufacturers name on. I picked them up cheap somewhere...
Sorry about the flash! 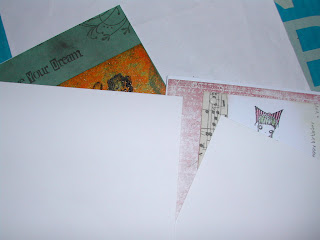 I made some birthday cards yesterday but can't show you fully till I know they've arrived as the recipients read my blog....  you know who you are! 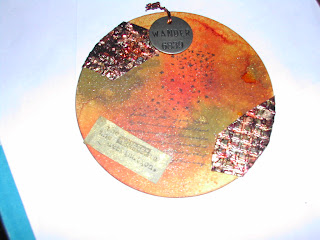 And finally, I had this circle chip out the other day and was just messing with colourwash (again!) but didn't know what to add to it. In the end, I used some leftover bits of the gold flakes on metal from earlier again, and a new stamp (which I bought before Christmas... its from memory box and I got it at the Stamp Attic - I think it's lovely and it stamps really well)     I sent it to a lady in my Wendy Vecchi yahoo group with an ATC from a swap -  I hope it's arrived so I can show you.
Ok, got to see if the duvet cover is dry enough to put back (no, I don't only have one, but it's my favourite...)
Posted by Helen at 19:17

Love the sailboat blue and lettuce colours together, they blend beautifully. Great pieces. Wish I could snooze in the day, I always seem to end up with a headache LOL. Tracy Evans x

I would never have guessed you love tags lol! These are lovely.
I was up earlier than you = 3.08am - got insomnia at the mo (sigh)
Are you watching the rugby? or is it just footie.
Lesley x

Love the tags and the sailboat blue and lettuce colours, all those different stamps are great. xx

I enjoyed reading your post Helen, it certainly made me smile...... and some great tags at the end of it. Enjoy your Sunday. Annette x

I must say, you kept your love of tags well hidden, I for one never would have guessed :P

These are as usual fabulous examples!

Ooh and thank you for pointing me in the direction of a fellow Alice nut! :P

Great tags Helen! Love the colors! That circle is great too! Lush colors on that...and, yep, I get the blog title...lol...

Has it got your fave team colours on then Helen?! The duvet, I mean! Lol! Your circle chip looks fabulous, great techniques & colours! Great tags too, look forward to getting a better look at those cards! Happy Sunday! xx

Love your tags and art work Helen. I came over to say thanks for leaving a comment on my blog and find all these beautiful things.
AND you live in Sutton. I used to live there years ago, my husband and I got married at St. Nicholas Church and my children were born at St helier Hospital. I even worked at The Gander pub for a while.
Hope you've had a good weekend.
luv and hugs {brenda} xoxox

I got your circle chip and its even nicer in the flesh!!!
Love the way you said "isent it to a lady".....a lot of people may not agree with you on that!!!