Welcome one and all to another weekly desk share -  join in at the Stamping-Ground for WOYWW a week to go before our 13th anniversary!  I've been having a bit of a play at some atcs to swap and hope to have a few ready in time! 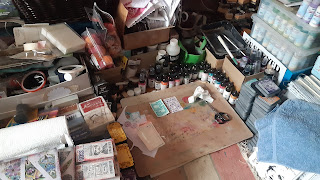 semi-aerial view of the workspace 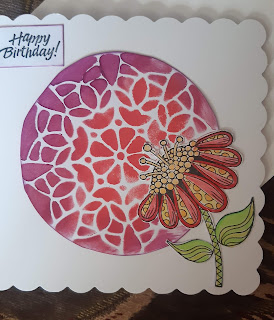 I had a birthday card to make for my cousin (who won't see this post so am ok to share)
I used one of Tracy Scott's new stencils (Dina Wakley paint) and cut it out,  and one of her new flowers (Prismacolours)
the early start for Kew was good - despite waking at 4.30 instead of 5.30 and not being able to get back to sleep! 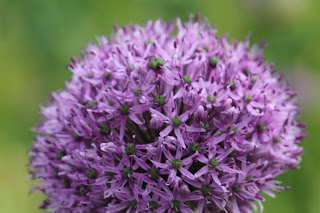 it's getting to allium time at Kew, and I do love my alliums!
As usual I will try and visit as many of you as I can either before work or at lunchtime and the rest later on!

I seem to have caught the "comments won't show" bug as I have left a comment twice now on Julia's blog and it's disappeared ... so if  you don't see a comment from me I have left one!

Love the card Helen - glad you managed to get some crafting done this week. Aliums are indeed beautiful flowers. Stay safe and Happy WOYWW. Sarah.

Love alliums to - to view and to eat! looking forward to next week! Robyn 7

Pleased you reminded me about the Alliums as we have some in the garden but I usually forget when they flower and by the time I remember they're finished and I've missed it. Lovely card for your cousin too, bet she loved it. Wishing you a very happy woyww, Angela x10x

A lovely birthday card, Helen. Your photos are stunning/ the structural tree ferns, gorgeous water lilies and birds of paradise. Thanks so much for sharing. Take care and happy WOYWW
Hugs
Lynnecrafts 5

No comment on show from you as yet, will take a min to go into blogger and check all is as it should be at my end. Deeply frustrating and time consuming isn’t it. I’m loving the card, the prisma colours look fab. Also loving the semi aerial shot…standing on the sofa? just be careful Miss H!!!

Love the latest card Helen. I love alliums too and noticed ours coming out yesterday when I was in the garden.
Hugs,
Annie x #9

Yep - our alliums are just coming into bloom - not such beauties as those!! We will swap ATCs as usual providing that's Ok with you. I don't know where the years go. Lovely card Helen - I like the flower. xx Jo

Your card is delightful - what lovely new stash, and I love the Alliums too - one of my (many) favourite flowers! That semi-arial shot looks very high up and I must admit my knees creak every time I see your desk on the floor!
Hope you have a great week,
Diana xx #14

Beautiful photos Helen, I enjoy all flowers and love the purple's. Nothing colorful here yet, Our seasons are messed up. 90 today? unheard of. No doubt followed by storms. ENjoy a great week.

Your colouring looks excellent to me and I love how you have married the two together in that card.
Hugs, Neet 6 xx

Fabulous card Helen! Off to take a look at Kew, hugs, Chrisxx

I'm not sure what's going on with not being able to leave comments. Too much tinkering is my guess. The card is beautiful - love both the flower and the stencil. I'm waiting for our alliums too but they will be a lot later than those at Kew, of course. Hope you've had a lovely WOYWW. Elizabeth x #4

First, I had NO idea it was nearly the 13th anniversary I'm SO out of the loop. Second, the oldest teen called Monday night and told me about prom. Then I got read the riot act because I hadn't visited your blog this past week. All three teens read your photo blog and know if I haven't left a comment. Between gardening, administrating AJJ, and having to replace my hot water heater (cold showers are not that much fun), I have been very busy. I promise to visit Kew before the week is out.

Love the card, Helen, actually reminded me of the allium below! Not posting this week, but will see you next week! Lindart

That card is stunning! Sorry I am so late! Happy very belated WOYWW. Caro xx (#18)