So, you may have seen the other post from Glasgow, if not it's here  Lin, Emma Sam and I decided to try this show as (obviously) we'd never been before.  Took a fair old while on the train, but it was worth all the hassle.

Once we had finished with the art shops (we had to take Sam on Saturday morning as owing to her delightfully extended journey she arrived too late to go on Friday) we got the train to the SECC and the show.

I've never been to the NEC in Birmingham, which is apparently much bigger.. anyhow, this is the gang 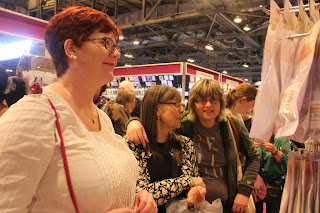 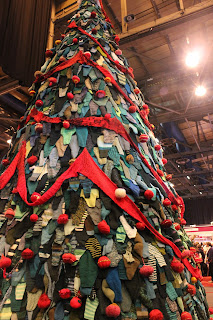 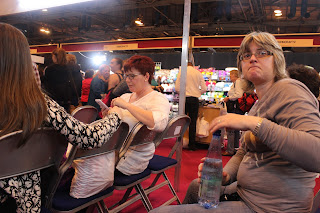 we stopped to watch a Pebeo paint demo and had lunch - we'd all got separated and I only found them again by accident.


I'd previously passed the Powertex stand, and seen some great textural items being demonstrated 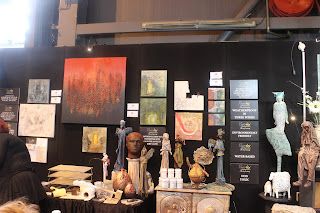 I promise I didn't see the "no photographs" sign (did see the "no videos" - oops!) but I've got them so I'm sharing them! 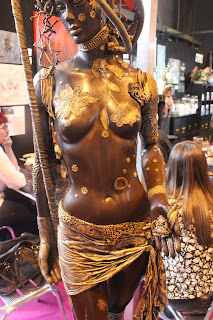 we Sat and watched a demo (workshops had filled up fast) after lunch, and all ended up buying some to have a go! 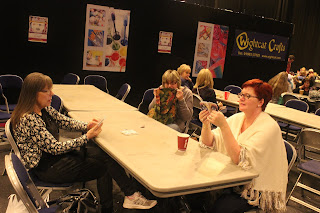 time for another sit down, tea and twitter catch up!! 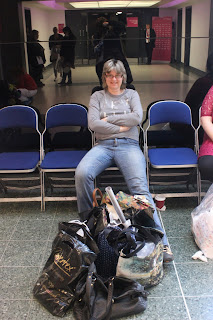 Sam guarding the bags while we had a loo break before going back to the hotel... yes, a successful trip I think you'll agree.. 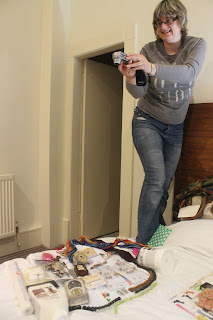 back at the hotel, we went to Sam and Emma's room for a show and tell.. the things we go to, to get the pictures for our blogs!  Sam has already posted hers here

I think this was Lin's pile.. 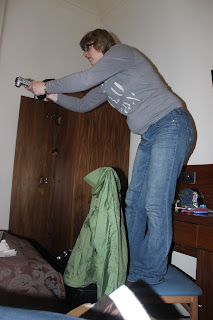 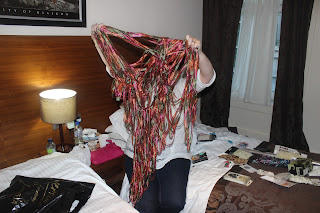 Emma decided to share some of her sari ribbons... where's the end, Emma?!  Actually, where's Emma?!! 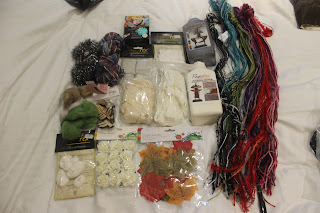 my haul from the show. See, I did get my fibres!

I got a bundle of the sari ribbons too, in the purple/blue combi - should probably have got the orangey/red one too, they were £2.99 for a 100 metre bundle..  At this time my bundle was still neatly stored.. 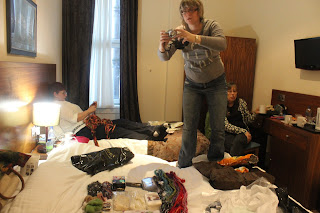 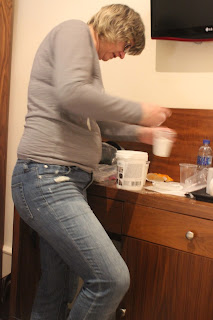 I promise this isn't as dodgy as it looks.  We got a tub of 3d flex powder to mix up with the Powertex product, and were going to share it out between us... 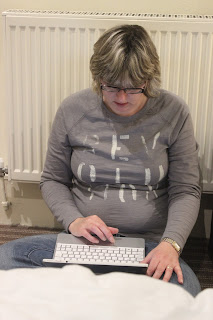 Sam then tried (and eventually succeeded) in blogging her story. 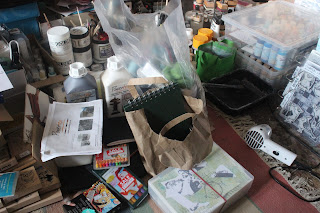 once home (at 11.30 on Sunday night) I quickly unpacked, only to make sure none of the powders or liquids had leaked in transit... oh what a mess! my total haul, including the purchases from the art shops (if you're in Glasgow, we all recommend the Art Store in Queen Street, it's fabulous!!) The Cass-Art store in the same street, is also good, much bigger than my nearest one in Kingston. 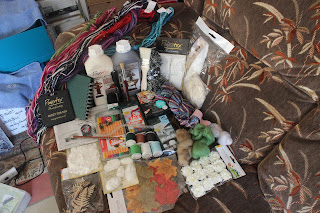 the pens and pencils came from the art shops we visited 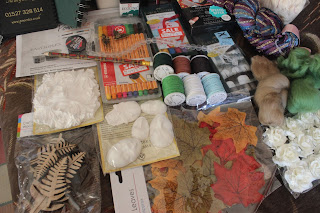 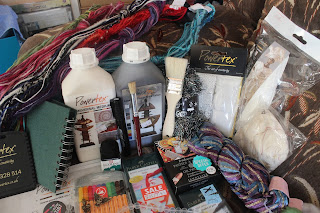 sari ribbons still neatly rolled as you see.. they aren't any more.. I think that may have been a mistake!

Yes, another journal (the green spiral bound book) but this one's got black pages so that's ok!! 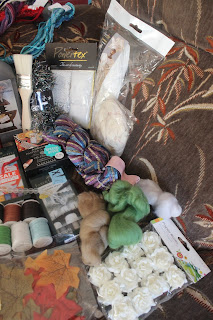 and yes, it all went in the case on the way home.. 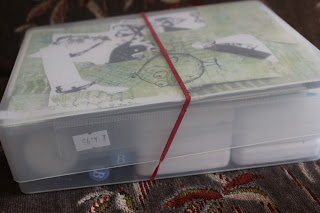 and this was my little box of goodies I took on the train for some journalling - we did on the way up but not home. See, I can travel light crafty sometimes!

Ooh some fab stash you got there. I can't believe how much you paid for my fave sari ribbon! I've only found it in one shop near me a couple of years ago and it cost me a small fortune just for a metre (all gone now sadly)! It was shame you each had your travel problems ....some more than others..... but it does look as though it was worth it. Can't wait to see what you do with the Powertex stuff!

Sounds like a good time was had by all Helen and such fab new stash to plat with. And that ribbon sounds like a real steal, fingers crossed I get to the NEC and will hope they have it there.

Glad you all had a fab weekend despite the travel blips, used to love exhibiting at this event tho' it looks a good deal smaller these days. Powertex is on my list too so I can't wait to see what you all make, and those sari ribbons look beautiful and an absolute steal x

Excellent blog post! Love the hotel room photos, they had me laughing out loud. :) Fantastic array of new stash too. Glad you had a great time.

Great post and great stash....I have powertex after seeing it on holiday in Crete last year...wonderful stuff but very messy! Love Sari ribbon too, use them all the time! So glad that you had a good time! Xx

I've heard of Powertex, I think on Angela's blog. In fact, I think she took lessons on it, but my memory isn't all that good this late at night (it's nearly 3 am here). But I've never seen it in ANY store here. I have some fabric stiffener, but nothing like Powertex, apparently.

Is that sewing thread I see? Since when do you sew? I look forward to this new adventure in fibers, Powertex, and sari ribbons. So glad you had a good time and took us with you.

Had to laugh at Sam taking photos. She sure knew how to capture everything.

Ooh some lovely stash. I have recently bought some powertex too but not had a chance to play with it yet.looking forward to seeing what you make with your new stash.
Kyla

Great photos Helen, looks like you all had a wonderful time!

I thought Sam was shooting with a water pistol at first glance. Looks as if the friendship you all have really does work as you all always look so happy on your photos.

Love visiting Cass art shop i Liverpool so can imagine you having a great time in two shops in Glasgow - and then the show!

Will be missing the Leeds one this time as I just cannot fit it in but I know how big and inspirational those stitch shows can be.

ooo lots of lovely stash! Look forward to seeing what you do with it!

Looks like a fantastic trip - and a great haul. The photos of the hotel room made me laugh!! I'll definitely look out for the Powertex demo at the NEC, thanks for the tip-off. But I'm determined not to embark on a whole new medium until I've used up some of the stuff I've got!!
Alison xx